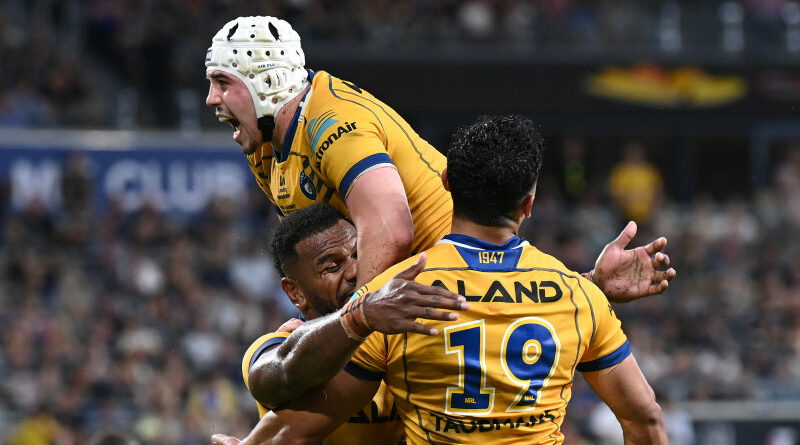 Queensland Country Bank Stadium: Parramatta are the first team through to the NRL grand final.

No, that’s not a typo, Eels fans. The 36-year premiership drought could finally end next Sunday after the blue and golds produced a brilliant defensive effort to hold out North Queensland.

The Eels may have scored the first try off a pass that floated “six metres forward”, but the way they withstood a mountain of pressure – and blocked out the deafening noise from 25,372 fans inside Queensland Country Bank Stadium – was sensational.

The Cowboys pushed hard for the equaliser. They thought they had levelled the scores through Kyle Feldt, only for the winger to put a foot into touch.

It could yet be an all-western Sydney grand final should the premiers defeat South Sydney on Saturday night. 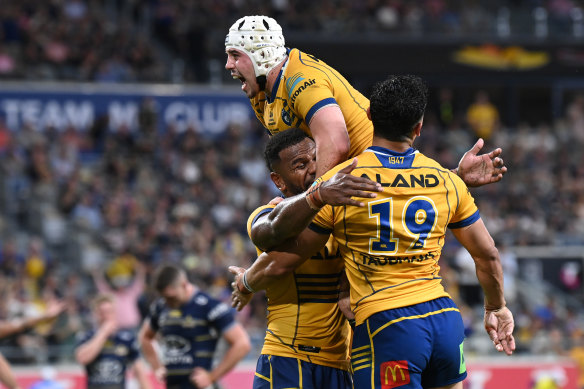 And Parramatta will back themselves against the premiers given their recent record.

The Eels deserve their day in the sun. It has been too long. They have often been the butt of jokes with rival fans because of the false starts, but they are a huge hope.

Coach Brad Arthur also deserves a bow after the pressure he has been under for the past couple of months.

His future would have been debated had the Eels lost to the Cowboys – and Arthur’s finals record slipped to three wins from 11 finals. Instead, he boarded the charter flight back to Sydney late Friday knowing his side is a live grand final chance.

The Eels completed 74 tackles inside their own 20m. It is the kind of effort required to go all the way.

Reagan Campbell-Gillard bagged a try double, with his second coming from close range and prompting him to award the try himself in front of referee Grant Atkins.

Campbell-Gillard was busy in the middle while Junior Paulo was involved in a late lifting tackle, but will be hard done by if he is cited by the match review committee.

Waqa Blake was placed on report for pulling the hair of Luciano Leilua, but any punishment will come in the way of a fine. Mitchell Moses celebrated the birth of his first child hours earlier.

Much was made about the hot weather in Townsville and the fact the Cowboys had the week off.

The home side started fast but the Eels kept turning them away. They went in front when a Moses pass sailed forward to Isaiah Papali’i, who threw the ball to Will Penisini to score.

Paul Vautin joked during the Nine commentary the pass went forward six metres, while Cameron Smith was a little more conservative and said it only went “one-and-a-half metres”.

Even if the Cowboys had made it through to the decider, they would have lost Jason Taumalolo to a shoulder charge.

The inspirational forward crunched Eels back-rower Isaiah Papali’i in the head with a shoulder charge in the 16th minute and was sent to the sin bin.

Gutherson told Atkins a few minutes later: “It’s a shoulder charge to the head – that’s a send-off every day of the week”.

Given Taumalolo already had three prior offences this year, he would have been looking at a minimum three matches on the sidelines with an early plea for a grade-one shoulder charge.

Shaun Lane returned from a head knock after a poke to the eye, while Arthur’s son Jake failed to see any game time.

Who cares, the Eels are through.