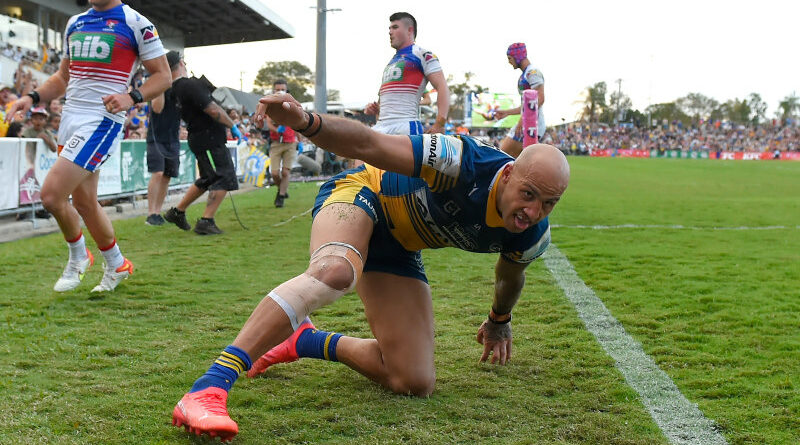 A Mitchell Moses-inspired Parramatta set up a sudden-death blockbuster against arch-rivals Penrith after ending the season of Newcastle, who will come under heavy scrutiny from the NRL over their handling of an apparent concussion to gun forward Tyson Frizell.

Brad Arthur’s miserable finals record is on the improve after the blue and golds booked a western Sydney showdown with the Panthers in Mackay, downing the Knights 28-20 with help of a late penalty try at Rockhampton’s Browne Park on Sunday.

But it could come at a huge cost with Junior Paulo (shoulder charge), Waqa Blake (high tackle) and Marata Niukore (late tackle) all placed on report for separate incidents. The NRL match review committee will finalise charges on Monday morning.

Having won just one of six previous finals matches under Arthur, the result will fuel confidence in the long-serving coach after they emerged from a late-season slump to beat minor premiers Melbourne last month.

And they’re now only 80 minutes away from a preliminary final against Craig Bellamy’s Storm, having been the only team to beat the title favourites twice this year.

Arthur would have felt uneasy for most of the afternoon as the Knights launched a second-half rally at the tiny regional Queensland ground, hemmed in by a leagues club and boasting goalposts with a flag on top of one upright and not the other. 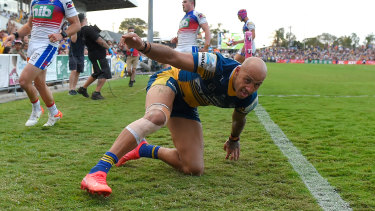 Blake Ferguson celebrates one of his two tries.Credit:Getty

There could be a sour aftermath for the Knights, too, after Frizell was rattled attempting an early tackle on the returning Reagan Campbell-Gillard. He seemed unsteady on his feet – usually grounds for immediate removal from the rest of the game – but was allowed to continue for several tackles.

He was eventually taken from the field, but surprisingly returned 15 minutes later after sideline officials were told he had passed his concussion test. The NRL is expected to review the incident on Monday.

Teammate Jacob Saifiti even pointed to Frizell to get referee Ashley Klein’s attention after the initial incident.

Frizell later copped another couple of bruising hits – including a tackle from Campbell-Gillard – before being replaced with eight minutes left.

Campbell-Gillard was back to his devastating best having not played since July, leaving Newcastle still searching for their first finals win since 2013 despite winger Enari Tuala’s hat-trick, the first play-off treble by a Knight.

The finals have been a nightmare for the Eels in recent years, and Clint Gutherson heaved the opening kick-off out on the full allowing Tuala to score even before the blue and golds had touched the ball.

But the most maligned man on their roster, State of Origin half Mitchell Moses, burst to life in the final five minutes of the opening stanza to hand Arthur’s side the half-time lead.

Moses scored a scintillating 40-metre solo try, piercing tiring Newcastle defence and swerving around Kalyn Ponga before Blake Ferguson dived over on the next set after rookie Will Penisini’s sublime flick pass.

The Eels looked in complete control when Ferguson touched down for his double early in the second half, only for Jake Clifford and Ponga to set up two Tuala tries within just four minutes.

But Tuala’s last contribution was season-ending, ruled to have dragged back Penisini as he chased a Gutherson kick, which Knights players protested hit the ground before it made contact with his boot.

Mansour finds form with ‘fun’ in relegation to Panthers reserves 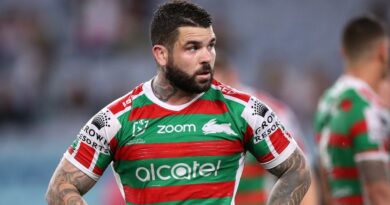 Adam Reynolds to roll the dice as South Sydney’s new $1.4m deal is knocked back