Parramatta half-back Mitchell Moses revealed he apologised to skipper Clinton Gutherson after going overboard in an on-field spat during the Eels’ commanding 40-12 win over Wests Tigers at Bankwest Stadium on Sunday.

Fox Sports audio picked up Moses telling his captain: “Gutho, quick Guth, f*** off” as the pair argued over whether to take a quick tap or shoot for goal late in the game.

The pair also exchanged words at halftime and during different stages of the game, but Moses had no issues with the reprimand he received.

“I thought he was trying to take a quick tap and I gave him a little bit of a spray and he goes ‘mate, don’t speak to me like that’,” Moses said.

“I realised what I did and said, ‘Sorry mate’.

“We’re in the heat of the battle and Gutho knows I mean it in the best way possible.

“I love Gutho. He’s one of my best mates in the team.

Coach Brad Arthur was not surprised to hear the pair had clashed.

“That’s fine as long as it’s all in good spirit. That’s the relationship they’ve got.”

Moses added: “When he speaks, everyone listens. Everyone in the team has so much respect for Gutho, including myself.

“If he gives you a spray it’s coming from a good place.”

Moses went from zero to hero in a stunning 15-minute transformation that blew the Wests Tigers away.

The Eels led by just eight at half-time but a Moses-inspired three-try blitz in the first 10 minutes of the second half set-up a resounding 40-12 victory.

From holding his head in his hands to holding it high as man-of-the-match, Moses scored a try and engineered two more early in the second half after earlier botching an easy four-pointer.

The No.7 swallowed a Gutherson grubber kick four minutes from half-time, diving over for what appeared a certain try and a 20-0 lead to the Eels.

But when the Bunker put it under the microscope, it found the smallest of knock-ons and denied the try.

The Tigers made the most of the let off, sweeping up the other end of the field and scoring through Jacob Liddle.

Just like that, a 20-point advantage was cut to a nervous eight-point lead and it was game back on.

Moses could have crawled in a hole but took it upon himself to make up for the embarrassing mistake.

It was his roof-high bomb just after the break that forced a dropped ball from Tigers fullback Daine Laurie, leaving Waqa Blake to pick up the scraps and score under the posts.

Moses did it all himself two minutes later, slicing through and outpacing the defence in a thrilling 65m run to the line.

As an encore, he produced a couple of double pumps before sending Maika Sivo over in the corner and kicking the sideline conversion on 50 minutes.

It swept Parramatta to an unassailable 32-6 lead – all three tries coming while Tigers forward Shawn Blore was in the sin bin for a professional foul.

The home side never looked in danger of defeat from there.

Moses finished with 20 points from a try and eight goals.

Eels forward Isaiah Papali’i finished the game in the sin bin after being reported for dropping a knee on Luciano Leilua. 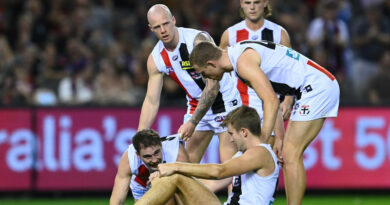 Loss to Essendon a wake-up call for embarrassed Saints: Ratten 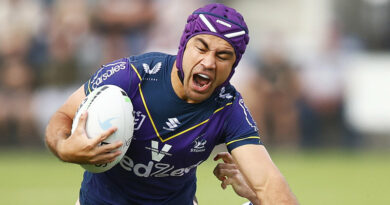