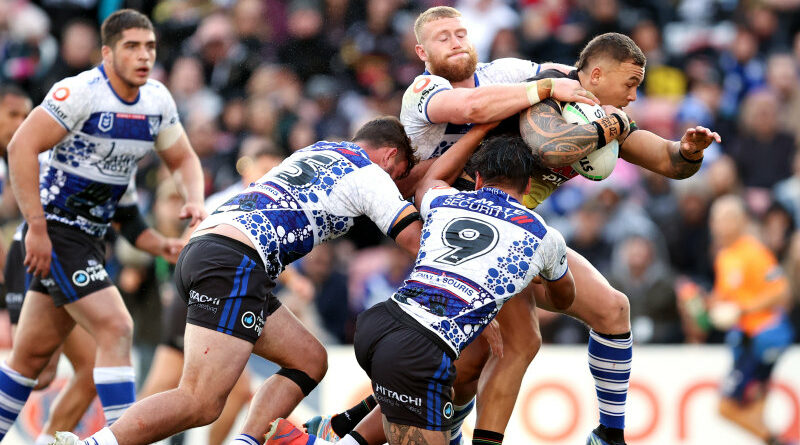 Brad Fittler arrived in Penrith hoping to replace his pencil with a pen.

The strongest side in the competition, fielding eight NSW hopefuls, were up against the weakest.

Nathan Cleary, Jahrome Luai, Stephen Crichton, Matt Burton, Brian To’o, Apisai Koroisau, Liam Martin and Isaah Yeo are all in contention. Their minds, for much of proceedings, appeared to be on the next game rather than the one at hand. 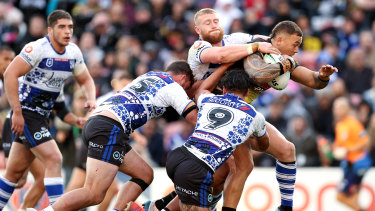 James Fisher-Harris of the Panthers carries a heavy load against the Bulldogs at Panthers Stadium.Credit:Getty

Crichton, auditioning for a centre spot from fullback, ran for just one metre less than To’o. The grubber kick he produced for a Paul Momirovski try was another demonstration of his array of skills.

Certain selection Cleary was given an early shower with 10 minutes remaining. Most interest surrounds the identity of his prospective Blues halves partner. Luai, by his standards, had one of his quieter games. But if Fittler values club selections and season-long form over incumbency, the choice is clear.

If ever the value of established combinations was evident, it was during Crichton’s scintillating late try. It was one of the most spectacular of the year, featuring Crichton, To’o and Burton, who produced a spectacular no-look overhead pass to find the try-scorer.

Jack Hetherington made his anticipated return from a five-match suspension. He was lucky not to be sent from the field within the opening two minutes. In his side’s first defensive set, he conceded a penalty for a high tackle. 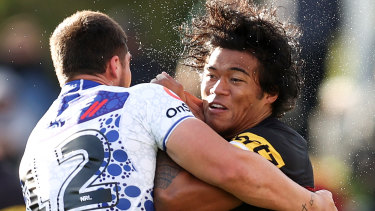 Brian To’o is tackled by Matt Doorey during his shift of chalking up 266 running metres.Credit:Getty

Showing how much he learnt from the experience, he then clocked Viliame Kikau high from the ensuing set. Identical offences have resulted in sin bins over the past fortnight.

“That’s two in two sets of six,” referee Matt Noyen to Canterbury captain Josh Jackson. “He’s got to fix it.” 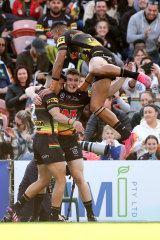 Charlie Staines is mobbed by teammates after his score for the Panthers.Credit:Getty

The incident was placed on report and could well result in another suspension.

Yeo will also be sweating on the findings of the match review committee. The Penrith lock’s high shot on Matt Doorey has the potential to sideline him for Origin I if it attracts anything higher than a grade-one charge. That is unlikely to be the case. Thankfully, Yeo’s last charge, for a crusher, dates back to April 2019, meaning there is no residual loading.

The obligatory sin bin came in the final minutes. Penrith forward Moses Leota clocked Jake Avarillo and is likely to miss Penrith’s next clash, against the Tigers.

The visitors came into the match as the most despised outsiders. Bookmakers installed them as a $21 chance and it seemed they got the market right when Charlie Staines scored the opening try after just four minutes.

The floodgates, however, didn’t immediately open. On the back of a stoic defensive effort, and the pinpoint boot of Jake Avarillo, the Panthers were held at bay early. And just as the half-time siren was poised to sound, Dallin Watene-Zelezniak had a brain explosion in the form of an offload that was intercepted by try-scorer Spencer Leniu.

The heads of Canterbury players dropped as they headed to the sheds.

The Bulldogs fought hard. All they had to show for their efforts was a late Aaron Schoupp try, which prevented them from being held scoreless by the Panthers three times in a row.