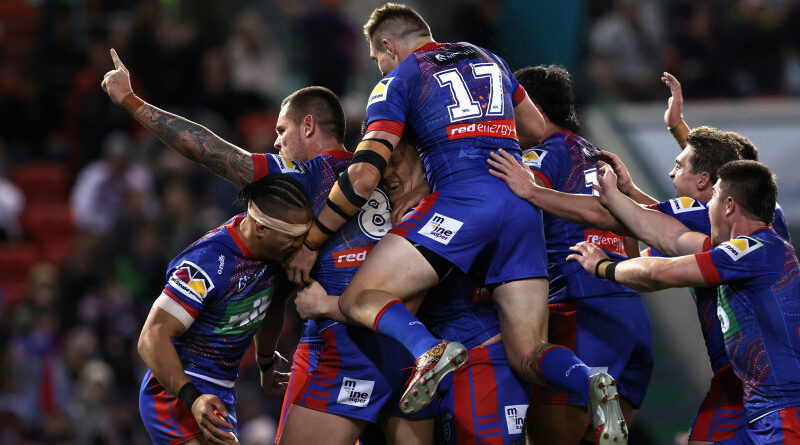 Brad Fittler faces another anxious wait for a State of Origin star to be cleared after Tyson Frizell was placed on report and limped off the field with an ankle problem in Newcastle’s stunning upset win over high-flying Manly.

On a weekend of high drama after Isaah Yeo avoided suspension for a high tackle and Cameron Murray escaped a charge for an alleged crusher tackle, Fittler will be sweating on NSW veteran Frizell escaping a ban for a high shot on Martin Taupau. 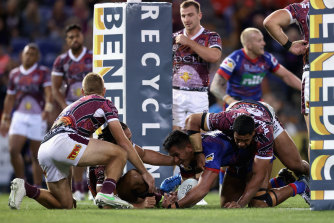 Daniel Saifiti crashes over for a late winner in Newcastle on Sunday.Credit:Getty

Sean Keppie had earlier been dispatched for 10 minutes after a high shot on Phoenix Crossland as Des Hasler’s side surrendered a 10-point lead while he was off the field.

Manly players were put on report five times – including Tevita Funa twice – but the booking which will attract the most headlines will be Frizell, considered a crucial cog of NSW’s bid to wrest back the Origin spoils given a lack of edge back-rowers. Roosters star Angus Crichton will miss game one through suspension.

Having lost four of their last five games, the win was a welcome one for Adam O’Brien’s side, who stifled the impact of Manly gun Tom Trbojevic to move onto the same amount of points as eighth-placed St George Illawarra.

Having named Tom and Jake’s brother Ben Trbojevic on the bench for his NRL debut, Des Hasler only called on the 19-year-old for the final two minutes. But as soon as he got onto the field was he leaving it after copping a high shot from David Klemmer. 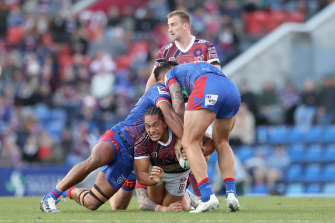 Manly’s Martin Taupau is wrapped up by the Knights defence.Credit:Getty

Klemmer was sent to the sin-bin with just 15 seconds left.

Both Newcastle and Manly were impaired by the mid-week withdrawals of Kalyn Ponga and Josh Schuster respectively, and Schuster’s replacement Funa probably wished he could have the first half over again.

Despite Funa’s first-half indiscretions, they weren’t even close to the brain fade of Sea Eagles back-rower Keppie, whose high shot on Phoenix Crossland completely changed the course of the game.

Record-breaking referee Cummins sent Keppie to the sin bin, and he was lucky not to have been marched given replays showed he made direct contact with the Newcastle No.7’s head.

Hasler’s side were coasting at 10-0 before Keppie was sent to the bin – their second try coming after Jason Saab’s near 90-metre runaway following a Lachlan Fitzgibbon mistake – but they went to the sheds behind after Starford To’a and Sauaso Sue scored with the visitors down to 12 men.

The match was on course to be the first scoreless second half in an NRL match for more than two years before Saifiti crashed over from close range moments after Frizell had left the fray, sparking wild celebrations in the Hunter.

Brad Hill not feeling the pressure after high-priced Saints move