Israel Folau announced his intention to return to playing rugby league in Australia on Friday alongside Clive Palmer – and no sooner had that happened then his controversial past caught up with him.

It was revealed Folau will line up for the Southport Tigers after walking out on Super League side Catalans Dragons to return to Australia.

The dual-code international, who was sacked by Rugby Australia for homophobic social media posts quoting the bible, thanked Jesus for his opportunity with the Gold Coast club.

NRL: Israel Folau stands by every word written in the Bible as he announces his return to Rugby League via the Southport Tigers in the Gold Coast’s local A-Grade competition….

NRL: Israel Folau stands by every word written in the Bible as he announces his return to Rugby League via the Southport Tigers in the Gold Coast’s local A-Grade competition.

Folau trained with his new teammates on Thursday and will take to the field for the first time next week.

But it was suggested Folau might have some difficulty singing the club’s victory song when he finally gets on the field.

According to Channel 7 reporter Bianca Stone, the Tigers’s team song includes the line “we want lesbians on our faces”.

I wonder if @IzzyFolau will sing the Southport Tigers team song when they win… which includes this line “we want lesbians on our faces..” can’t wait for this 9am media conference with Folau and @CliveFPalmer

Folau and Palmer were asked what they made of the lyrics.

Told the team’s song “celebrated lesbians” Folau said: “I’ve just signed with the club. I have no idea about what the song is.”

Palmer deflected the nature of the song and dismissing the journalist’s questions as nothing more than a “beat-up”.

“I’ve been a player and been there for 50 years and I haven’t heard it,” Palmer said.

“It sounds like a beat-up and someone’s given you that. I just don’t think it’s true. I can say as a player who played as Tigers.

“I was in the dressing room last Sunday and they weren’t singing the song then. I think it’s sensationalism.”

Folau: I stand by the bible

Palmer’s mining company are sponsoring the 32-year-old’s return, which is pending approval from Queensland Rugby League.

The businessman and politician also took out a front-page advertisement on The Courier-Mail on Thursday: “LET ISRAEL FOLAU PLAY FOOTBALL.”

Speaking to reporters on Friday morning, Folau thanked Jesus Christ for the opportunity to sign with the Tigers — a club his brothers represent and Palmer is a patron of.

“I just want to give thanks to my lord and saviour Jesus Christ for this opportunity,” Folau said.

“I am excited to be here and link up with Clive. The opportunity he’s given me and my family is something I’m really grateful for.”

When asked about the homophobic social media posts which derailed his rugby union career in 2019, Folau responded: “As a Christian I stand by the bible and what the bible says.

“Every written word that’s written in that book, I stand by that. That’s all I say about that,

“As I said, I believe what the bible says. And it’s clear. I didn’t write the bible. That’s God’s written and I believe that wholeheartedly.

Israel Folau and Clive Palmer during a media conference which was held in Brisbane. Picture: NCA NewsWire/Tertius PickardSource:News Corp Australia

“I don’t know what his views are, all I know is that he’s placed on Twitter or something a quote from the bible and I know the bible is used every day and quoted in churches right across Australia,” Palmer replied.

“For me, it’s nothing extraordinary that someone makes a quote from the bible.

“It shouldn’t affect someone’s livelihood and how he can support his children.”

Palmer also claimed he would take legal action against QRL if the governing body does not approve his registration.

“My commitment is rock solid. I will pledge every cent, dollar and waking moment of my time to make sure he takes the field again,” he said.

“If people want to challenge him legally and say things that aren’t right – watch out.

“We want an example where people of all faiths can play sport. Religious freedom is a fundamental right in this country.

“I’ve got some resources and if it got down to a legal battle, I’m sure anyone opposing somebody on the basis of religious persecution would go down very seriously and pay damages. There’s no legal basis to not register him, he’s been cleared by the Broncos.” 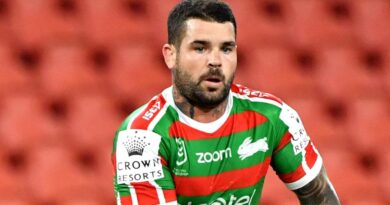 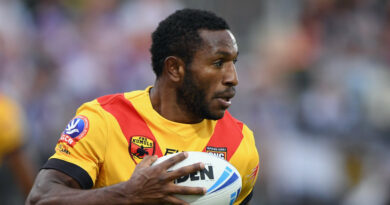