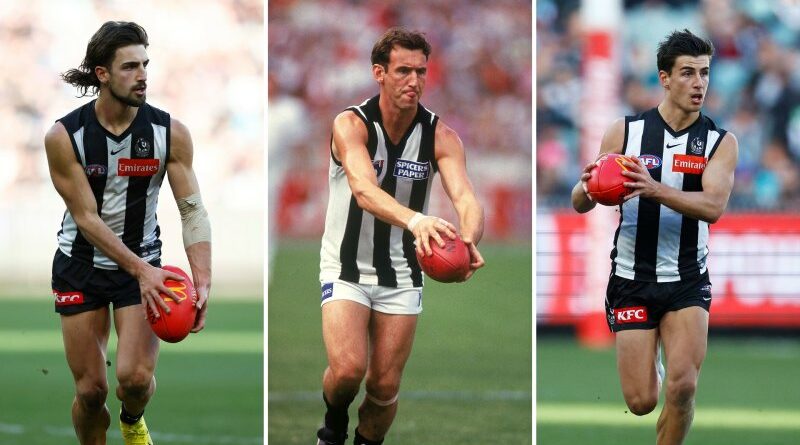 Most days this century, most of the year round, the three Daicos boys – Peter and sons Josh and Nick – could be found in a park near their inner-eastern home, rehearsing footy the Daicos way. You could say that class was in.

“I always talk about balloons,” says father Peter, the Collingwood legend. “A balloon has to be caressed. So does a football. If you try to pull a balloon into you, you don’t grab it, you do it gently. That’s a little bit how you clutch and control a football.” 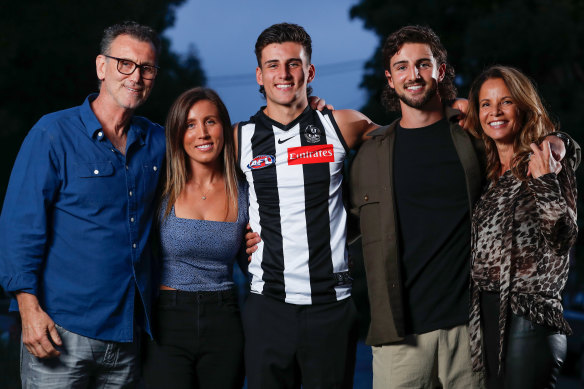 They would study everything. “Learning how to play when you haven’t got the ball; that’s a big interest of mine,” says Peter. “And goalkicking, which is not so much about goalkicking, as accuracy. The true measure of accuracy is when you miss. The great kicks in our game – [Jason] Dunstall, [Tony] Lockett – they missed, but never by much. It’s like golfers: they might miss a 10-foot putt, but they don’t miss by much.”

“Study”, advisedly: Peter would make competitive games out it all. They used full-sized balls. Always, the emphasis was on touch.

Peter is particular about boots. Once when tutoring Dan Hannebery towards the end of his Sydney days, he asked Hannebery how he chose his boots. “The boot company sends me the latest and I pretty much just pick a colour,” he replied. 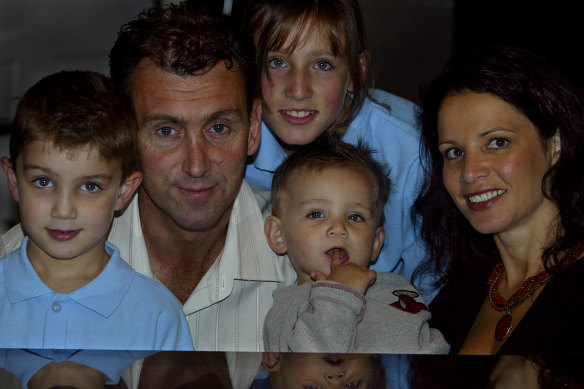 Josh at 5 with Peter, Maddie (11), Nick (14 months) and Colleen.Credit:Sebastian Costanzo

Peter was surprised. “The most important thing for a footballer is your boot,” he says. “We’re all made a bit different. You’ve got to make sure they fit. When I was coaching, parents would buy a size bigger so that they would keep them for two or three years. That wasn’t good for touch. And it’s all about touch.”

Rainy days at the park were a bonus, a chance to learn and whet new skills. “It was about taking the sting off the ball,” says Peter. “A lot of players go at it really hard and it slides through. It’s the same when taking a mark. That first touch should be with flat hands to take the sting off the ball. The second one should just land straight in your lap.”

There’s Daicos “should” and there’s mortal “should”.

As for the soaking? “They loved it,” says Peter. “Most kids do.”

‘Even during the pre-season this year, they’d come home from Collingwood … have a quick bite to eat, then go off to the park.’

If not the park, it was the backyard. “In a park, it’s like golf, you’re always trying to whack the crap out of it,” says Peter. “In footy, you try to kick the big torp. If you kick it too hard in the backyard, it’ll go over the fence. It’s like playing cricket in the backyard. It becomes more about control, technique, touch.”

So instead of booming torps, it might have been about dinking the ball over the glass wall around the pool. Only once can Peter remember it all ending in shards.

If not the park or backyard, it was school and club footy, and as many AFL games as they could. Peter’s life membership entitled him to tickets. “We went to a lot of non-Collingwood games,” he says. There was footy on the TV, too, a family occasion, a couple of toy footies always at hand. 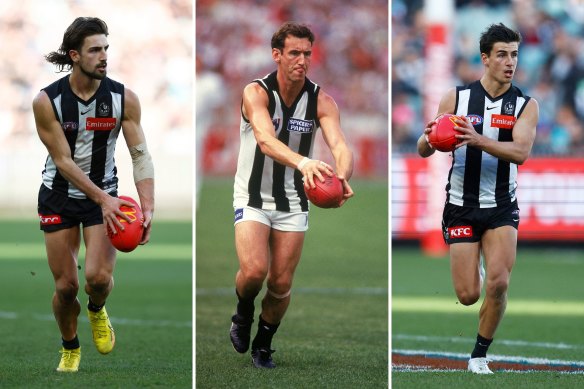 The family in action: (from left) Josh, Peter and Nick Daicos.Credit:Getty Images

Then for Josh and Nick, it was straight back to the park. “They were always up for a kick,” says Peter. “Even during the pre-season this year, they’d come home from Collingwood after a whole day, have a quick bite to eat, then go off to the park. Not all the time, but once or twice a week.”

Sometimes, they drag 60-year-old Peter along still. It’s not that he’s reluctant, just slow. “I’m getting a lot slower,” he says. “I can’t run any more. The knees are bone on bone. If the ball goes over my head, I’ve got to walk to get it.

“But I still get down there and try to have a kick with the boys. It doesn’t leave you. It was such a huge part of my life.”

This is the cradle that nurtured two latter-day Collingwood stars. The pathways, then the Magpies, contemporised their education. For Magpie fans of a certain age, it’s father-son heaven: not just any father, but Peter Daicos, not one son, but two. 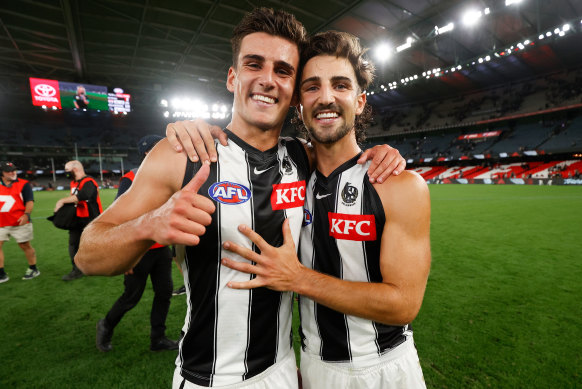 Nick and Josh this year.Credit:Getty Images

Though four years apart, Josh and Nick are unaffectedly close. They’ve bought a house together, which means they are temporarily both back under the roof of parents Peter and Colleen while waiting for workmen. “There’s not a lot they don’t do together,” says Peter. “They’re always looking out for each other.”

When Peter and Colleen rang Josh last month to congratulate him on his selection in the All-Australian squad, the first thing he said was: “I’m disappointed for Nick. So disappointed.”

Josh’s name preceded him. But as a junior, he was slightly built and Peter held him back until he filled out. Behind him, Nick had two advantages, a mature body and the fact that he had spent all his life training with a league footballer. He came ready-made.

“I always thought the boys were a chance, but a lot has to go your way,” says Peter. “For every kid that makes it, there must be tens of thousands that miss out. I realised when Josh first got into the system how hard it is.

Let’s not forget older sister Madison, a non-footballer, but fully on board. “She comes for a kick sometimes,” says Peter. “She’s not too accurate, but she goes all right!”

Both Daicos boys have played every game of Collingwood’s improbable romp of a season, and their father has ridden every leap and bound with them.

“Throw the stats sheet out,” says Peter. “It doesn’t count for much now. It gives you a bit of a guide, that’s all. The thing you can’t measure is what’s going on inside a player, how he’s thinking, the fire in his belly. One of the underlying things about our [Collingwood] boys this year has been their spirit. Tactics can get found out, but spirit’s always hard to combat.”

Peter says Collingwood’s fitness this year has been underrated. “Their conditioning is sensational,” he says. “It reminds me a little bit of playing under Tommy [Hafey]. We’d run and run, even in grand final week. Good or bad, but we got there for a reason. We won games in ’79, ’80, ’81 [all grand final years] by grinding teams down.”

Forty years later, Craig McRae’s method might be more sophisticated than Hafey’s, but the effect is age-old. “I love the energy of this team,” says Peter. “The way they start games, they finish them.”

Within an hour of the final siren last Saturday, Tracey Wright, wife of Collingwood general manager of footy Graham Wright, was rallying the club. On Saturday morning, Peter, Colleen and Madison will join other families on a charter flight to Sydney for a preliminary final Peter is sure they can win. “I am pumped,” he says. “It’s a big week.”

Behind them in Melbourne, one other of the Daicos line will be torn. Stan, Peter’s father, grew up in South Melbourne and was an avid Swans supporter (and so was Peter). When Peter retired, Stan reverted to the Swans. He’s been unwell lately, but he’ll be glued to his grandsons on the TV on Saturday. Be it the bloodlines or the Bloods, it’s still coursing strongly. 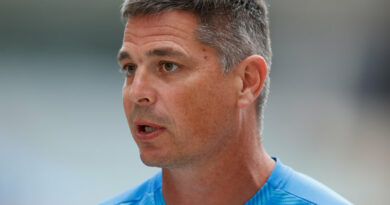 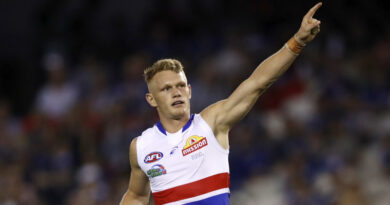 Third straight loss could have dire consequences for Broncos