Former Broncos assistant coach Ben Cross has had his application of unfair dismissal thrown out, after arguing he only found out he had been replaced at the club via a screenshot sent to him by a friend.

The former Origin star was one of three assistant coaches to head coach Anthony Seibold at the Broncos ahead of the NRL's lockdown. 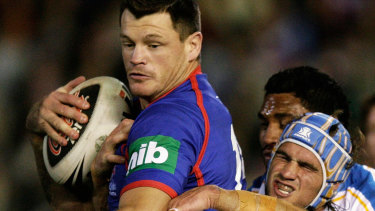 Ben Cross playing for the Knights in 2008. Credit:Getty

"Mr Cross is upset and perhaps legitimately so, that he was not contacted and given a courtesy call from Mr Seibold before hearing about it from friends who gave him a screenshot of a Broncos website," the decision read.

"It is perfectly understandable that Mr Cross was upset, annoyed and indeed angry that had occurred."

Cross texted Broncos head of football Peter Nolan after being sent the screenshots, which were used as evidence in the application.

"How should I be handling this Peter, I've been fielding calls from family, friends and media," Cross wrote in the text message.

Mr Nolan responded: "Crossy – I just have the grand kids here tonight mate. I will call you in the morning. I thought Seibs [Seibold] was calling you as well? I will call tomorrow morning."

"Extremely disappointing to see it posted on Facebook before hearing from you or Anthony," Cross said.

Cross then sent across an email to Broncos' HR manager Tain Drinkwater outlining how "disappointed" he was in the Broncos organisation.

"I have read and was sent this today regarding the hiring of Peter Ryan at the Broncos, I was made redundant as my role was no longer necessary in my field of ruck forward defence and tackling technical coach," he wrote in the email.

"I offered my services at a reduced contract and at any capacity to the club."

Shortly after, Drinkwater responded reiterating his redundancy was a matter of "cost saving" and to "ensure the future of the club".

"I am disappointed that this has been played out in a public forum and acknowledge that you are disappointed," she wrote.

"Peter Ryan has not been engaged to replace you in your previous position, however given our performance since the start of the revised season, we will be utilising his services on a short term basis."

Cross argued to the commission he had relocated his family to Brisbane after it was indicated to him he had "long-term" prospects at the club and that he was "only coaching staff member in the entirety of the NRL to have lost their position in the pandemic".

This was not challenged by the Broncos.