It took them the best part of 80 minutes but the Dragons finished another underwhelming season in style with a 30-22 win against the Storm.

Melbourne rested 12 players who will be in the team which faces Parramatta in a qualifying final on Saturday at Suncorp Stadium. 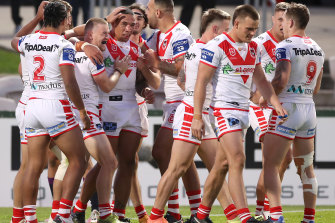 Tyson Frizell scored twice in his final match with the Red V.Credit:Getty

Melbourne essentially fielded their second best 17 – which does still happen to be a strong side – and the Red V still struggled to put them away.

If it wasn't for Matt Dufty and Cameron McInnes, the Dragons would have lost. It's as simple as that.

The pair – along with Zac Lomax – have been two shining lights in an otherwise disappointing season and that was once again the case in front of the restless fans at Netstrata Jubilee Stadium.

Dufty scored two tries – one set up by a brilliant McInnes break – and the Dragons hooker dribbled the ball in behind Melbourne's line for Lomax's try, which was awarded via the bunker after Ricky Leutele bumped him off the ball.

When McInnes put Dufty over in the 60th minute it appeared as though the Dragons would run away with the two premiership points.

But Nico Hynes scored a sensational individual try to ensure a grandstand finish, with the score 24-22 in the home side's favour with just over seven minutes to play.

A perfect Jayden Sullivan chip kick then fell into the arms of Tyson Frizell to seal the result in what was the Kangaroos and NSW star's final game in the famous red and white strip.

It will not be the last time we see Sullivan.

The teen debutant is only lightly framed and was belted more than once but he bounced back to his feet after every hit.

He also showed glimpses of attacking brilliance and the ability to hold his composure and force repeat sets off the boot, too.

AFL games could be cancelled for eight weeks, says medico