Home » Rugby League » From Buddy and Dusty, to Gillon and the return of Ross, it’s a big summer ahead 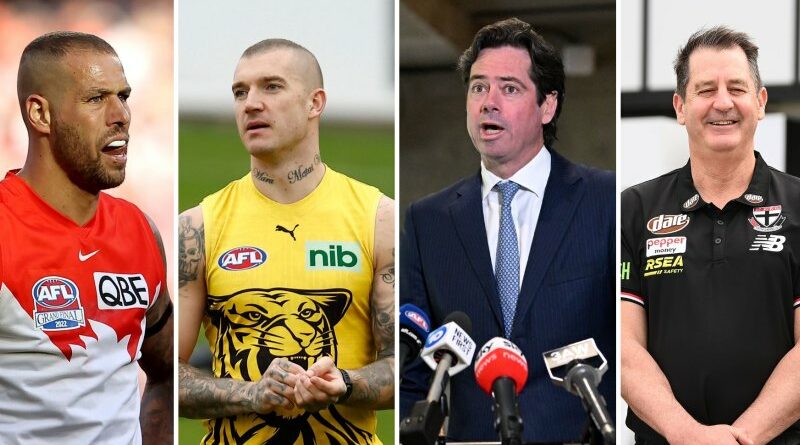 It may be the off-season, but there is plenty riding on what transpires over summer for clubs, players, coaches … and AFL heavyweights.

We take a look at what’s on the agenda, and on the line, several AFL clubs and prominent names over summer. 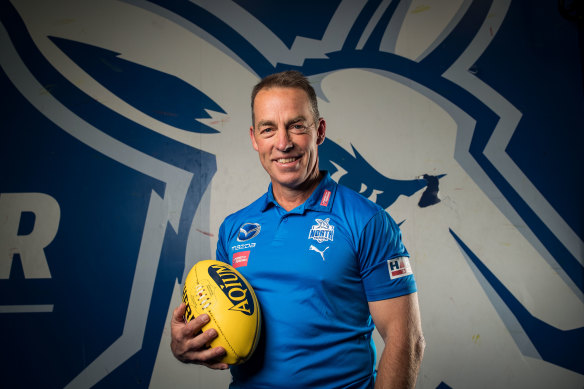 Alastair Clarkson says he can handle the demands of pre-season training and taking part in an AFL racism investigation. He has denied all claims.Credit:Getty Images

Alastair Clarkson: The four-time premiership coach has officially started his new job role as North Melbourne coach, but faces a major juggle until Christmas, for he is being investigated by the AFL and faces questioning for alleged acts of racism during his time with the Hawks. Clarkson has strenuously denied the claims, and has engaged legal counsel. Meanwhile, at Arden Street, what shapes as a lengthy rebuild begins in earnest. Will he introduce a more attacking game plan than what he adopted in his final years at Hawthorn?

Chris Fagan: Like Clarkson, the Brisbane Lions coach is at the centre of the Hawthorn racism storm, for he was also mentioned in a Hawthorn-commissioned report which interviewed First Nations players and families who had been at the club between 2008-16. Fagan has also strenuously denied the claims and has legal counsel.

Ross Lyon: The Saints secured the ruthless coach they wanted, and Lyon 2.0 now has the chance to complete the unfinished business of 2007-11. This summer is all about implementing a game plan conducive to the modern game that lifts the Saints from back-to-back 10th placings. While the memories of 2009-10 linger for Saints fans, Lyon has not led a team into the finals since 2015. 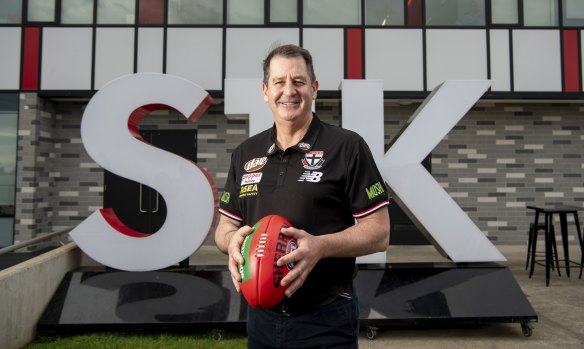 Brad Scott: The former AFL operations boss shrewdly played the game of coaching poker with the Bombers, and now gets a second chance at the top job, this time with a power club – but one riven by factions. The challenge is to immediately get Kevin Sheedy, and the coterie groups, on side, and find a way to develop a defensive ethos and toughen a side which fell apart too easily and too often this year.

Ken Hinkley: The Port Adelaide coach is heading into his 11th season (without a premiership) at Alberton, and the final year of his current contract. It’s a flag or bust. The summer will set the tone for one final assault.

John Longmire: Admitted he had erred in selecting an injured Sam Reid for the grand final – the forward finished before half-time in what became a disastrous 81-point loss to the Cats. The man known as “Horse” needs to be an amateur psychologist to his entire team over summer, ensuring there are no scars from the heavy beating.

Craig McRae: The Magpies enjoyed their greatest surge up the ladder in their history, vaulting from 17th to missing the grand final by two points. The challenge for McRae over summer is to avoid players drinking their own bath water. And while we are on the Magpies, Jordan De Goey – complete with a new lucrative contract – needs to stay out of trouble. Best hide that passport.

Michael Voss: The Blues made the right call in signing Voss, but the bottom line is this – they failed to make the finals, as they had in David Teague’s final season. Indeed, they became the first team in 45 years to be finals placed in finals contention through every week of the home-and-away season, only to fall out after the final round. The Blues are locked, loaded and have a bursting salary cap. There are no excuses for Voss this summer and into the season proper.

Dustin Martin: Managed a career-low nine games last season, but the Tigers maintain the slumping superstar can still be a major threat. The three-time Norm Smith medallist needs to show over summer that he is fully invested and wants to be a part of the Tigers’ next premiership push. But does he?

Lance Franklin: Turning 36 in January, “Buddy” needs an uninterrupted preparation to have him ready for what shapes as his final season. He may have booted 52 goals last season, but a goalless qualifying final and grand final – both at the MCG – has raised questions about the focus on him inside attacking 50. 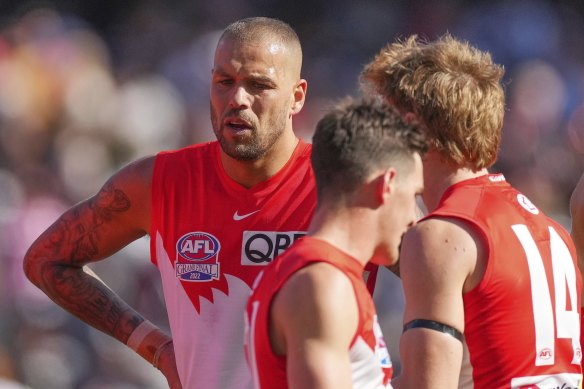 Tough day at the office: Lance Franklin was held goalless twice in the finals, sparking questions about his role in the Swans forward line.Credit:Scott Barbour

Jason Horne-Francis: The former No.1 pick forced his way out of North Melbourne after only one season, and landed at the club of his choice – Port Adelaide. Now home among family, there’s no excuses this summer.

Tom De Koning: Patrick Cripps, Sam Walsh, Charlie Curnow and Harry McKay are all flush with cash after inking lucrative, long-term deals. The young ruck-forward, also seen as a key piece of the Blues’ future, is off contract next year (his sixth at Princes Park), but has opened contract negotiations. If a new deal is not in place come round one, a strong summer and start to the new season for De Koning will ensure a long list of suitors.

Nat Fyfe: The Dockers superstar was restricted to only seven matches and missed the finals because of injury – and never got going. He needs a big pre-season. New teammate Jaeger O’Meara also deserves a mention. O’Meara now has a chance to forge a spot in a side truly fighting for finals when that hope at Hawthorn was over. 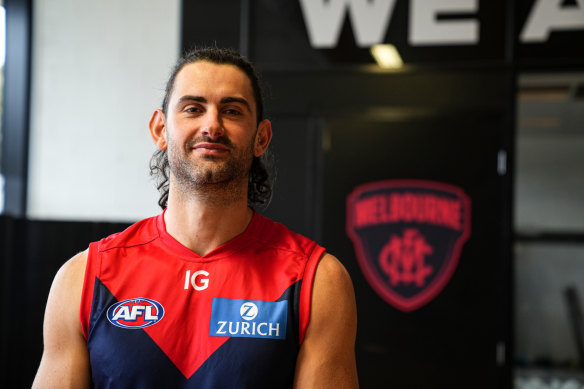 Brodie Grundy: The former Magpie and dual All-Australian needs to find a way to work with Max Gawn. If so, the Demons will have the best one-two ruck punch in the league.

Sam Reid: As is the case with his Sydney teammates, the key forward will want to move on quickly after a horror grand final.

Rory Sloane: The Crows skipper ruptured his right knee in the win over Richmond in April. At 32, the star midfielder needs a big summer to get back to his best.

Gillon McLachlan: The AFL chief had been due to finish up about this time, but he is now expected to remain until Christmas – perhaps even longer – with several agenda items to tick off. Yes, a $4.5 billion broadcast deal – which underpins the sport – has been brokered, but a new collective bargaining agreement with players, and a final call on whether the league’s 19th licence is awarded to Tasmania, have yet to be sorted. The latter hangs on the AFL’s insistence that a new state-of-the-art stadium be built in Hobart – and just who pays for this. The federal government says it won’t consider ponying up its share until the Tasmanian government’s plans are presented. But the state government is split in its backing of a team, and the opposition have flat out said no. McLachlan’s renowned deal-making skills are needed, in what could be his legacy. 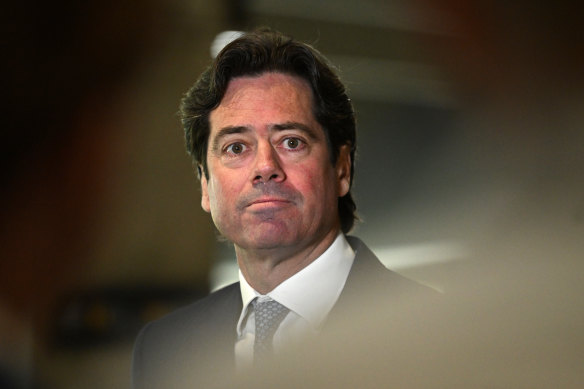 Travis Auld: The league’s second in command has been touted as a successor to the outgoing  McLachlan, but the Bombers have expressed interest in luring him back to the club as chief executive. If he is overlooked for the league’s top role, does he stay and wait to fight another day? Big call.

Andrew Dillon: The league’s long-time legal counsel and Mr Fixit, now also in charge of football operations, is also one of the favourites to replace McLachlan. If he is overlooked, does he stay or go?

Jeff Kennett: Will say goodbye as Hawks president at the club’s AGM in December. The challenge for Kennett is to get his preferred successor Ian Nankivell across the line, for he faces a formidable challenge from 1991 premiership player Andy Gowers. High-level Hawks supporters insist Gowers will win. Time will tell.

Geelong: The Cats remain the model club, and celebrated an overdue flag under Chris Scott. But the man who set the parameters – Joel Selwood – has retired. Will it be a smooth transition to a new skipper?

Hawthorn’s media and membership departments: The Hawks have purposely been gutted, as coach Sam Mitchell orchestrates a major and perhaps painful rebuild. The membership department will need to find a way to sell this; the media types will need to begin massaging how best to explain what may unfold next season. For, as we know, the best of intentions can go awry. Just ask David Noble and Brett Ratten.

West Coast Eagles: The 2022 campaign was just about as ugly as it has been ever in the Eagles’ history. Adam Simpson needs to implement a revised game plan, and his players must buy in. Here’s hoping Oscar Allen can have an unscathed preparation.

Concussion protocols: The medical substitute is out of favour, with the lure of a five-man bench growing in popularity. Will the AFL pull the trigger? Meanwhile, the league will debate its 12-day protocols for concussed players. Will the minimum break be extended?