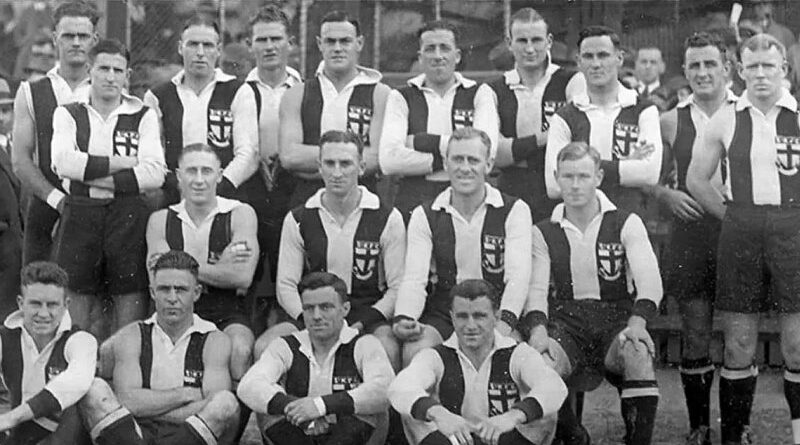 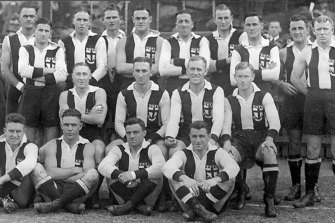 Nothing finer nor more inspiring than St Kilda’s magnificent battle against overwhelming odds has been witnessed at the seaside oval within the memory of the oldest supporter of the club. It was a superb exhibition of indomitable pluck, stamina and steadfastness of purpose.

Early in the game the match was robbed of football interest by the excessive, and at times unnecessary, use of weight and strength by the visiting side. From almost every crush and pack players were knocked reeling, and trainers were soon scampering in all directions. 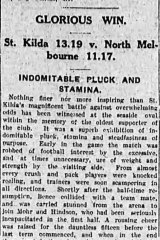 Part of the match report published in The Age for the May 29, 1933.Credit:The Age Archives

Shortly after half-time resumption, Bence collided with a teammate, and was carried stunned from the arena to join Mohr and Hindson, who had been seriously incapacitated in the first half. A rousing cheer was raised from the dauntless fifteen before the last term commenced, and when in the end they carried the day, the crowd rushed the ground, eager to chair the tired, battered, but happy winners.

Play in the first term was much below standard, and lacked interest. The visiting wing and ruckmen forwarded time and again, but as the forwards lacked any semblance of anticipation, the St Kilda backs had no difficulty in thwarting their puny efforts. The first casualties occurred when both Cave and Wrout retired to have wounded heads dressed. St Kilda clapped on the pace towards the end, and superior across the centre, they lead at the change.

Plenty of nip and dash characterised the opening of the next term, but this soon degenerating into a battering display. Mohr was accidentally injured when he fell across Gaudion’s powerful kick-off, and shortly afterwards left the field with a fractured rib.

Taylor led practically every North Melbourne offensive, but although the visiting forwards were showing a lamentable lack of coordination, the St Kilda men were equally as bad in this respect. Player after player was subjected to unnecessary physical violence, and shortly before the bell Hindson was carried off with a badly damaged ankle. F. Roberts, however, placed St Kilda a goal in front with a shot after the bell had rung.

St Kilda took the field in the second half with sixteen men, and immediately pressed home an attack. With J. Anderson outstanding they were getting the better of the play, but again force and brute strength were employed to curb the system of the homesiders. In quick succession, S. Anderson, W. Roberts, G. Heil, and Bence received the ministrations of the trainer, as did Smith and Barker, of North Melbourne.

Interest in the game, as a football match, had long since departed, and the crowd booed its disapproval of the methods used. With Mohr absent the forwards could not kick goals, but nevertheless they increased their half-time advantage, and led by sixteen points at the final change.

Heartened by a rousing sendoff, St Kilda scored two goals in quick succession, and then was witnessed the only enjoyable football of the match. St Kilda were now supreme in every department, and Bourne, Chapman, and J. Anderson excelled themselves.

The sympathy of the crowd was with the gallant seasiders, and deafening roars welled up whenever they secured a goal. In marked contrast was the comparative silence that greeted North Melbourne’s scoring shots.

Anderson was the outstanding man afield, and his two brilliant goals placed his side in an unassailable position. The visitors fought back doggedly in the latter stages, but lack of training was now evident, and St Kilda won a richly deserved victory with fourteen points to spare.

All the St Kilda men played stirring football when called upon in the second half, but J. Anderson, Chapman, King, W. Roberts and Bourne were outstanding. All the others were recipients of congratulations for their fine efforts in the victory.

Though C. Gaudion was able to show out for North Melbourne, it was largely in his favor that he was unguarded, and Taylor must assume precedence as the most serviceable players in the side. Lewis, Fitzmaurice and Cameron were dependable as ever, but most of the other players were greatly below form.