Home » Rugby League » From the Archives, 1991: Footscray shines while Blues go to the dogs 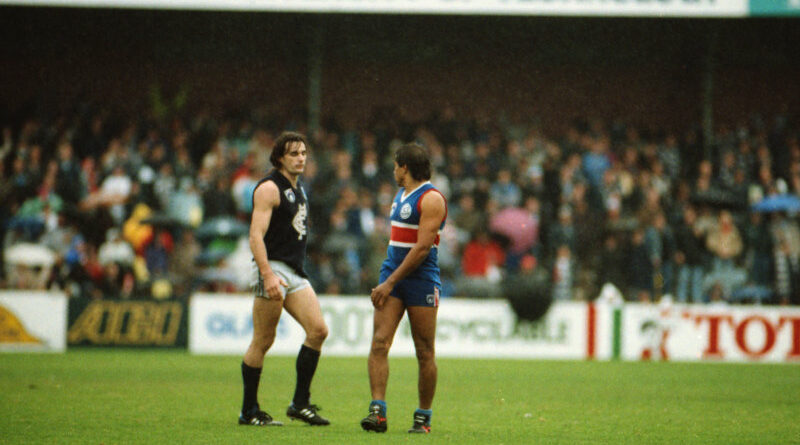 Footscray shines while Blues go to the dogs 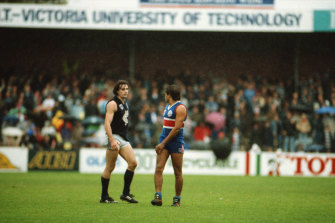 Footscray faces off against Carlton at Western Ovel in 1991.Credit:Stuart Hannagan

In football, the definition of adversity is the Western Oval on a windy, wet winter’s day.

David Parkin says a footballer cannot claim to have made it until he has shown the ability to overcome adversity. At Footscray yesterday, Terry Wheeler’s team stepped into the ring with purpose. Parkin’s Carlton shuffled up meekly and paid the most severe price for this equivocation, a 41-point defeat in a critical game.

Carlton’s 1.10 (16) was its lowest score since 1904 and its worst in 111 contests with Footscray since the Bulldogs joined the old VFL in 1925. The Carlton Football Club has won more VFL-AFL premierships (15) clan anyone, and never had the dubious pleasure of accepting the fabled wooden spoon, but it has had few worse days than yesterday. 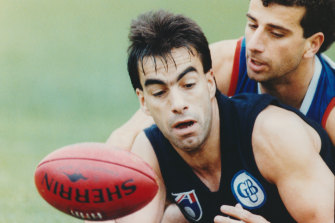 The fact that Mark Arceri finally broke the drought of goals in the last minute of the game from a free-kick relieved Carlton of some embarrassment, but not much. The rooms were deathly quiet and Parkin looked and soundest emotionally spent. “I don’t know how good we are and I don’t know how bad we are,” he said. “But we weren’t too good today.”

Not that any criticism of Carlton should detract from Footscray’s performance, which was superb. It was not so much that the Bulldogs relished the awful conditions, for only a duck could have enjoyed it, but that they used them to advantage. As usual the wind favoured the scoreboard end, which had the effect of dividing the contest into four distinct games, and Footscray won all four, kicking two goals in each Quarter.

Footscray was better at ground level and superior in the air (63 marts to Carlton’s 36). Its ball-handling was crisp as you could expect on such a filthy day. It kicked long with the wind and short into the breeze, following the time-honoured rules of playing at the Western Oval. 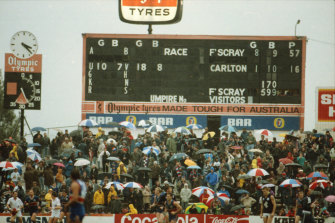 Spectators huddle under umbrellas as the rain pours down.Credit:Stuart Hannagan

It was a day for primitive football, the sort they used to play in the parks a century ago, with a massive scrum of players following the ball and hardly a chance of a clear possession. The first term set the tone, with Carlton using an extra defender to counter the wind advantage, and at times there were 32 players In Footscray’s front half.

Parkin felt that Carlton blew its chance here, when it failed to capitalise on a good opening eight minutes. As it fumed out, Footscray seized the initiative and refused to surrender it, ensuring that it remained in touch with the top six. Wheeler said he would be happy to turn at 6-5 with a victory over Sydney next weekend.

Footscray’s inspiration came from an impenetrable defence led by Steve Macpherson and Peter Foster, who did a fine job on Stephen Kernahan, and from Its reliable midfielders Simon Atkins and Tony Liberatore.

The abiding memory of this slogging match will be of Atkins under packs, spearing out hand balls to players in better position. In the last quarter, as his tally of disposals rose above 30, he was accidentally kicked in the head by a Carlton player. He rubbed it for a moment, then tossed himself into another contest.

Skipper Doug Hawkins played at the scoreboard end throughout, alternating as a forward and loose defender, and brilliantly at that.

Footscray also had Glen Coleman, who could scarcely have found himself in more adverse conditions — both in terms of weather and in his opponent for much of the day, Steve Silvagni.

But Coleman mirrored Footscray’s response to the situation presented yesterday. He marked the slippery ball as though it were dry and scooped It up from the wet surface with one hand. It is difficult to believe there can be a more improved player in the competition.

Together with Chris Grant, who capped an excellent return from injury with three goals from half-forward, Coleman provided Footscray with the sort of attack that Carlton lacked. The names were there for the Blues — Steve Kernahan, Jon Dorotich and Simon Minton-Connell — but not the results.

Kernahan’s lack of form must be a big worry for Carlton, but then again, he is scarcely the only worry.