The best way to sum up the difference between Wayne Bennett and Anthony Seibold is to talk about the drone.

Former Souths coach Michael Maguire introduced the drone to training at Redfern in the club’s premiership season in 2014, long before other coaches were using them — with the possible exception of Des Hasler, the Steve Jobs of rugby league given his penchant for technology. 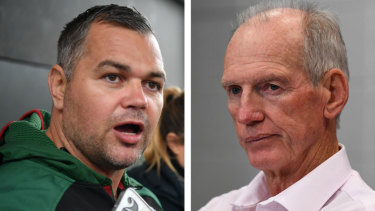 The drone at Souths films training sessions from above, but it's had its issues.

One time, the wind got hold of it and it slammed into the side of the grandstand. Another time, it ended up in nearby housing commission. Then Souths got in trouble because they didn’t have a drone licence.

An information addict just like Maguire, Seibold would pore over drone footage.

That’s what impressed people at Souths about Seibold when he replaced Maguire: his attention to detail, his undeniable hunger to do better. 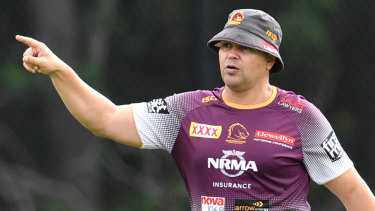 All in the details: Broncos coach Anthony Seibold likes to use technology and data as part of his coaching style.Credit:AAP

Bennett is not that kind of coach. He doesn’t need an expansive coaching staff or a stack of stats and sports science at his fingertips. He doesn’t have email (although he's good on the text).

And he’s doesn't need a drone. His feet are firmly planted on the ground. His players, too.

While Seibold certainly has a warmth to him, and Souths players felt it in his one season with them, Bennett is an old-school man manager cut from the same cloth as Jack Gibson when it comes to getting the best out of young men. Exhibit A: Cody Walker.

The Bennett-versus-Seibold narrative is an easy one to follow with the two teams meeting at ANZ Stadium on Thursday night — the first match since both coaches played off-season swapsies.

In truth, the animosity has been overcooked.

Bennett has no issue with Seibold. He feels betrayed by Broncos chief executive Paul White, and his former captain and now director Darren Lockyer, over the way he was manouevred out of the club.

Perhaps the angst rests with Seibold, who seems paranoid about Bennett and reads too much into every word the mastercoach utters.

Seibold became testy last year when asked about him possibly signing with the Broncos. He walked out of a media conference last weekend when pressed about coming up against his old team. 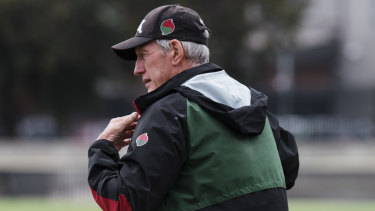 There’s no doubt that he felt Bennett was too manipulative late last year when they both became each other’s replacements.

Bennett, for his part, seems to take great delight in doing Seibold’s head in and, even more so, those at his former club.

The great irony in how both teams have started this season is that Souths looked like being the last team standing in the comical game of coaching musical chairs that played out during the off-season.

Make no mistake: Souths were desperately disappointed to lose Seibold.

They put their necks on the line in sacking Maguire, the man who ended a 43-year-old premiership drought, to bring in a rookie coach. They still believe Seibold started talking to Brisbane months before Seibold told them about it.

Souths essentially got Bennett because there was nobody left to get. They got Bennett despite noses still being out of joint when he reneged on a deal at the last minute to sign with Nathan Tinkler’s Knights in 2012.

Now, Bennett and the Bunnies are flying first-class: equal first on the ladder with the Roosters and Storm.

Forget about the Broncos' two-and-five start to the season. Seibold is said to be facing a player revolt. Or, at the very least, some players have itchy feet. Or is it their managers? It’s often hard to tell.

As revealed by the Herald, someone very close to Roberts recently approached Souths about him reuniting with Bennett, who showed great faith in him in Brisbane as Roberts grappled with his issues around alcohol.

Souths say they don’t need him, although the Broncos believe that Bennett is talking to Roberts and that is something that Bennett would no doubt enjoy.

The Rabbitohs reckon they have plenty of centres. Their concern is shoring up their middle, with several forwards including George Burgess and Ethan Lowe coming off contract.

Roberts has told others he fears returning to Sydney where he will fall into old habits. He’s also told them he wants to move to the Titans to play alongside his cousin, Tyrone Roberts, although the Titans say he's not wanted.

Meanwhile, Broncos halfback Kodi Nikorima could be a Warrior by the end of the week, perhaps as soon as the day after the Souths game.

Other Broncos players are also said to be restless. Prop Matt Lodge, another one who Bennett believed in when others didn’t, is off contract at the end of this season.

Then there's Tevita Pangai jnr, who's also unsigned next year.

He’s also suffering from the same headaches that Bennett did at the Broncos: a slow hooker and two halves that like to run the ball but can't really manage the game.

Seibold has time and he has the hottest players in the game coming through, and not just in the forwards.

Most NRL clubs would crawl over broken glass to have young halves like Tom Dearden, Corey Paix, Tanah Boyd and Sean O’Sullivan in their systems.

We will see in time if the Broncos backed the right horse.

When the Broncos board chose Seibold over Bennett, they did so because they were impressed with the mind-boggling depth of his analysis and power-point presentations.

Bennett's pitch was said to be something like, "I'm the most successful coach in the history of the game".

And to think he did it all without a drone. 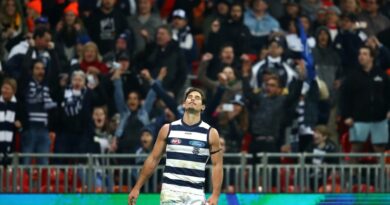 From the Archives, 2017: Giants and Cats can’t be separated in thriller 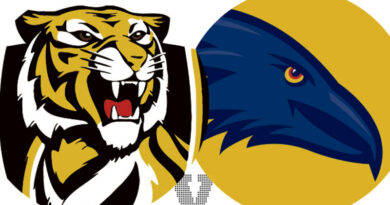