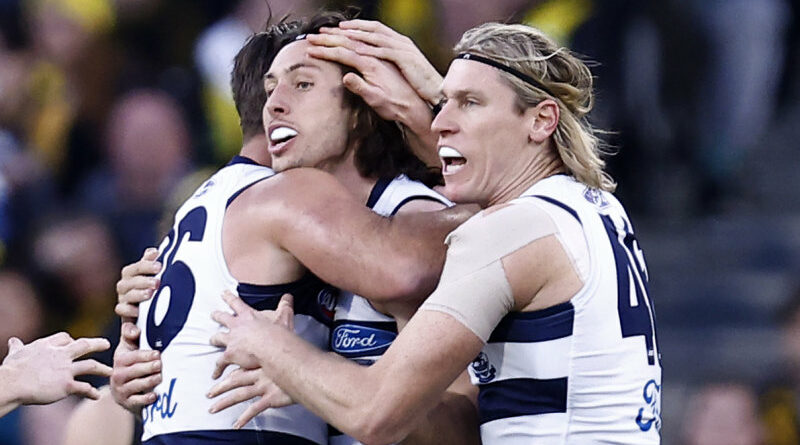 A big mark and goal from Geelong’s Jack Henry in the dying minutes has seen the Cats win a thriller over Richmond in a drama packed last quarter fitting of two premiership contenders.

The Cats appeared gone when they trailed by 17 points in the last quarter, having coughed up a 35-point lead to once again appear Richmond’s bunnies in a game that mattered.

But Jeremy Cameron moved into the centre and turned the momentum around with creative ball use and a last quarter goal that gave the Cats a three-point win. 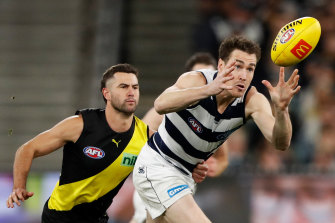 Richmond were brave and unlucky losing Dion Prestia to concussion in the first quarter after Tom Stewart elected to bump him and was reported. They then trailed by 35 points before kicking eight of the next nine goals.

They even recovered the lead with two minutes remaining when Maurice Rioli junior broke a run of three Geelong goals with a nerveless finish in just his ninth game.

But the centre clearance ended with the high-flying Henry, who converted from the top of the square to end a run of losses against the Tigers after leading at half-time that may have haunted Geelong if repeated for a third time.

It seemed as though the same story was being written as Richmond were running all over a tired-looking Geelong early in the final quarter with their high intensity, high octane football as exciting as any hardcore gig.

But this version of the Cats has Cameron and the will to not let that sequel be reproduced even when most of their fans had their heads in their hands wondering how they could avoid Richmond supporters all week.

It was a huge shift in momentum as in the third quarter as the Tigers mounted their comeback they kicked 5.2 from 10 beautifully constructed inside 50s while Geelong could not find an avenue to goal.

During this patch of the game their ball movement was swift as they swarmed any Cat who had the temerity to gain possession. It was brutal.

The Cats did not help themselves with two 45 degree kicks – one from Sam Menegola and one from Jake Kolodjashnij – missing their targets, which opened up the game enough for goals.

Hugo Ralphsmith pounced on the second miskick at the 21-minute mark of the third quarter and snapped a goal to put the Tigers in front for the first time.

They did not look like losing until Jack Riewoldt had a spectacular mark taken off him as Tom Lynch had dragged Sam De Koning to the ground and the Cats began to run in waves with Ty Stengle and Brad Close instrumental with last-quarter goals.

The Cats lost the pacy Gary Rohan to illness early in the game with Zach Guthrie coming into the side. It led to the matchwinner Henry playing forward as the Cats tightened their grip on the top four.

‘Come at me’: Gould unleashes on critics over Flanagan selection