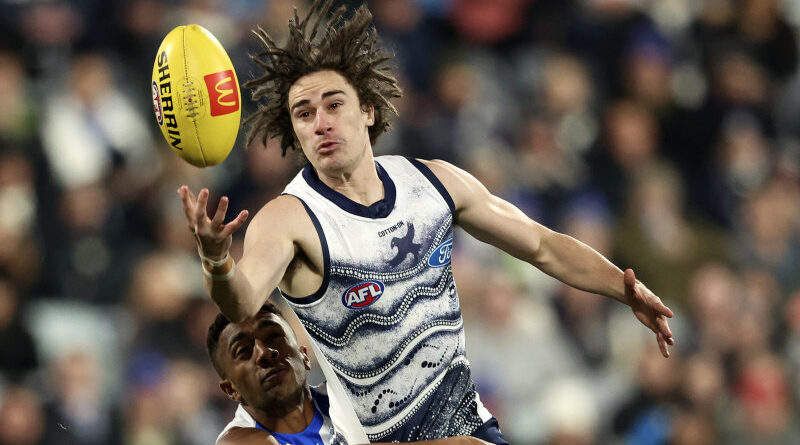 North Melbourne’s season from hell has continued as Geelong handed them a 112-point thrashing to keep them mired at the bottom of the ladder without any sense of direction.

It took only 13 seconds for the predicted result to seem certain when Patrick Dangerfield stormed out of the centre to kick a goal with his first kick for six weeks, the predicted thrashing seemed inevitable.

Even with Tom Stewart missing through suspension and Sam De Koning the Cats’ mandatory late out for this week, the margin seemed the only question left to be answered. 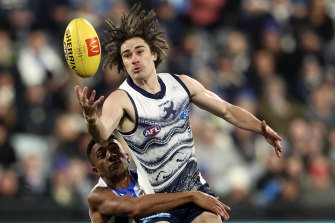 Could the Kangaroos keep it below 40 points after becoming the first team to lose 10 consecutive matches by that margin or more in the game’s history?

When Aaron Hall was subbed out with a quad injury within the first five minutes and then Kayne Turner was concussed as Geelong went three goals up an ugly night stretched ahead of North Melbourne.

They responded initially when Luke Davies-Uniacke led a mini-fightback that saw the Kangaroos bounce back with three unanswered goals to finish the quarter in touch. Determined to ensure the team avoided embarrassment Davies-Uniacke had 15 touches and five centre clearances by quarter-time.

His efforts allowed Paul Curtis to show his class inside 50 and gave Nick Larkey a chance to test the Cats’ defence.

However, that was the only time they were competitive as the Cats dominated after quarter time in an effort sure to sharpen Geoff Walsh’s pencil as he advises the board on what changes are needed to reboot the demoralised outfit.

Even in an era that has seen Geelong destroy teams regularly at home this was a mauling, akin to watching a hurricane rip through a fibro shack.

It isn’t hard to see the gap in skill level, size and experience between North Melbourne and their opponents but it was difficult to understand why they persisted with Ben McKay in attack in the first half while Tom Hawkins took control of the Cats’ forward line at the other end against the gallant but ill-suited Josh Walker.

By half-time McKay had one touch while Hawkins had 11 disposals and had kicked two goals. It was hard to work out how the move benefitted North Melbourne or McKay. By game’s end Hawkins had kicked six goals to outscore North on his own.

The margin by that point had slowly but steadily blown out beyond five goals but North rarely lost control of the game as they chipped the ball around in defence, making maintaining possession a priority. It was tedious and hard to understand that they did not try to kick the ball down the line given they had three tall forwards.

What it did mean was the ball stayed in the Cats’ front half as they stretched the margin beyond 50 points and Hawkins and Cameron began to take control. Belatedly McKay was moved into defence midway through the third quarter, but such was the supply David Dench, Mick Martyn and Glenn Archer would have struggled to contain the scoring.

For the Cats, the game was a tune-up with their work around the contest and tested, and their ball use refined as they worked the angles to run the ball from one end of the ground to the other repeatedly in the third quarter without it touching the ground.

By the final break they had reached the double of 100 points and 50 inside 50s while the Kangaroos loitered around on five goals and 21 inside 50s.

It was a hard watch for Kangaroos’ supporters who have to watch their team thrashed weekly and did not see them create a scoring opportunity for most of the second half as they were outscored 13.9 to 1.1.

How long they can continue serving up these performances without changes remains a question everyone is asking. 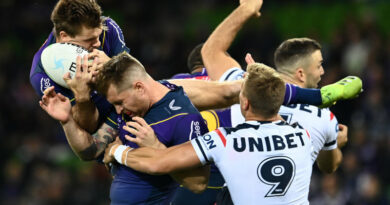 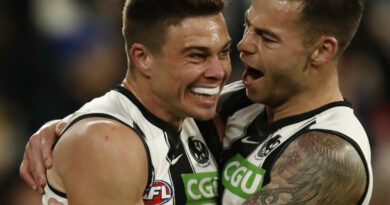 ‘It could be my last year’: Pies skipper not thinking about footy beyond 2022