Geelong hope to honour the record-breaking achievement of captain Joel Selwood with a win against Collingwood at the MCG on Saturday night when he passes former Carlton skipper Stephen Kernahan’s record for most games as captain in VFL/AFL history.

The three-time premiership Cat has attempted to downplay the significance of the milestone as he prepares to play his 227th game as Geelong skipper, having taken on the role in 2012 aged just 23.

However, Cats coach Chris Scott said the club wanted to give fans the chance to recognise the remarkable contribution he has made to the football club. 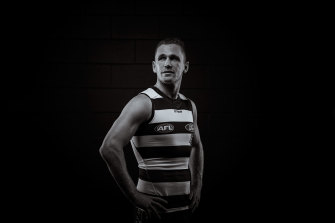 Remarkable contribution: Joel Selwood will break the record for most games played as captain of a VFL/AFL team this weekend.Credit:AFL Photos

“It is a one-off, it’s the first time this has ever happened. It’s a genuine record that is going to be very, very hard to break in the future,” Scott said.

“We’re trying to make it about [Selwood] a little bit because he deserves it, and he keeps deflecting it to everyone else and I think that is one of the marks of a great leader.”

The Cats are wary of the new-look Collingwood under Craig McRae. Scott said the return of key players such as Taylor Adams and Jeremy Howe – who missed significant periods of football in 2021 – made them a dangerous proposition.

“They look like they are challenging the opposition’s defence,” Scott said.

The skipper did not appear overly comfortable with the focus on himself, emphasising the support he had received from teammates and the football club during his time as captain. It was clear he wanted an improved performance this week after the Cats’ six goal loss to Sydney.

“We have learnt quite a bit over the first couple of weeks … we understand that we need to be as sharp as we can be,” Selwood said.

Selwood agreed there was pressure on captains but didn’t overstate it, saying his love for the game and the contest far outweighed any of the responsibilities that came with leadership.

“When you get to throw that jumper on just before a game, before I walk out, there is no better feeling that I get each week than that,” Selwood said.

Cameron Ling was captain under Scott for one season before Selwood took over in the role and the relatively young duo found their way together as they took the Cats to six preliminary finals and one grand final.

The coach and the captain both said their bond would never be broken, and Selwood said he hoped to lean on Scott regardless of where football took him after his playing career came to an end.

“The mutual respect that has been built between us has been such that nothing will get in the way of the relationship that we have. We are still really optimistic about what we can do together in the future, so we are not going to spend too much time looking back. I look forward to a lifelong relationship with Joel,” Scott said.

Cats veteran Shaun Higgins will return to the team to play the Magpies after being managed against Sydney while Scott indicated that Sam De Koning was likely to return to defence after missing round two with concussion. 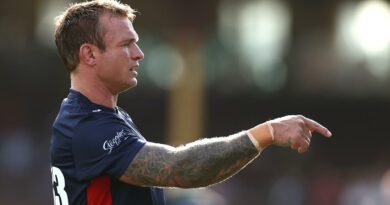 Nine things to look out for at the NRL Nines