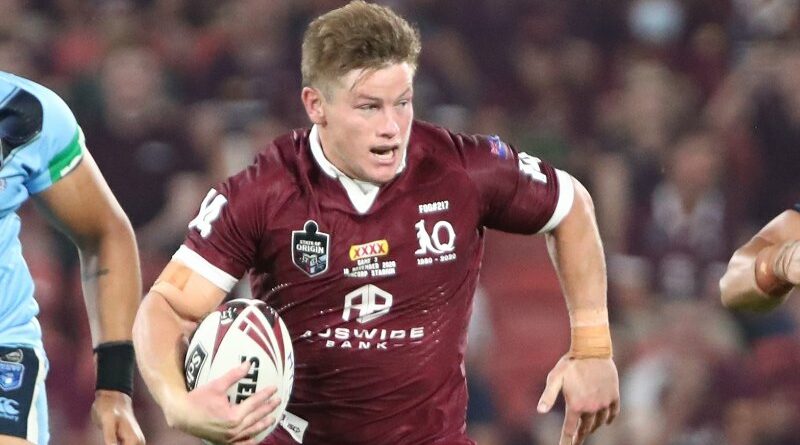 Pre-season training resumed for the club on Monday with the Storm returning to training at AAMI Park for the first time since June last year. 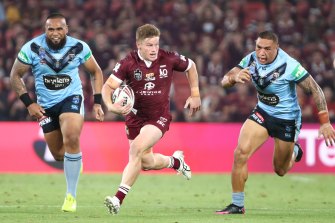 Night to remember: Harry Grant made a stunning Origin debut in 2020.Credit:NRL Photos

Two surprise additions at Monday's opening session were State of Origin forwards Christian Welch and Dale Finucane who were meant to be on leave until January 18, while Grant played Origin III but was required back due to not having participated in the finals as he spent last season on loan to Wests Tigers, who finished 11th.

In recent years Smith was allowed extra time with his family before returning to training later in January and while his locker is still in place, he is out of contract and believed to be with family in Queensland.

Smith is yet to declare his plans but the club is preparing to play without him unless they hear otherwise.

Grant meanwhile is preparing as if he will be Storm's starting hooker although teammate Brandon Smith is also pushing for that role after playing as a utility forward in recent seasons.

"I think he is still on his book tour," Grant joked when asked about Cameron Smith.

"Smithy has a few more weeks [on his usual break time] and then we will go from there."

Grant is under contract with Melbourne and said he expected to be with the club all season regardless of the premiership skipper's plans.

The majority of the Storm's New South Wales-based players were able to rush back to Victoria before the border was closed, with Grant stating Finucane took 17 hours to drive from Bega to Melbourne.

State of Origin winger Josh Addo-Carr remains in NSW as he has two more weeks of leave. The club is believed to be seeking an exemption for him and his family to return, as under current restrictions he would need to quarantine for 14 days.

"A fair few of them had to make a dash, I think a few are still unknown with what the go is," Grant said. "I'm sure they will sort it out in the next few days."

Brandon Smith was reportedly looking at potential moves for 2022 to a club that needs a starting hooker, but Grant wants him to stay.

"It will be up to the coaches. Competition is good for the squad and makes everyone train a bit harder and perform better," Grant said.

"Me and Brandon have a pretty good relationship, it's up to Craig [Bellamy]. Let's see how we go.

"I think most of the boys will be [telling him to stay] but it's up to him and his family."

Grant had a stellar 2020 with the Tigers, winning Dally M Rookie of the Year and earning his debut for Queensland. He returns to Melbourne with more experience along with the drive to play in a premiership after watching the club win the title.

"It was pretty special watching the boys win the comp, especially with all they have been through in being away from Victoria and based on the Sunshine Coast. It's credit to the whole squad," Grant said.

"I wasn't really a part of it so I'm looking forward to building towards it throughout this season."

NRL in a bind over sex tapes with more videos expected