Ivan Cleary has torpedoed South Sydney’s claims Penrith are using illegal blockers to shield halfback Nathan Cleary, confident the star No. 7 can handle the “target on his back” and kick his side into another grand final.

There are concerns at Redfern over suggestions Penrith players are loitering in the ruck to deliberately guard Cleary from kick-chasers, and there have been calls for referee Ashley Klein to intervene should the Panthers employ the tactic during a preliminary final at Accor Stadium on Saturday night.

There were similar complaints from the Rabbitohs this time last year. Then-Rabbitohs coach Wayne Bennett accused the Panthers of practising illegal blocks to protect Cleary at training as the rivalry between the two clubs reached tipping point before they met in a grand final.

“It sounds like Groundhog Day. It’s exactly the same as what happened last year,” Cleary said on Thursday. “What I do know is that Ashley Klein is a very experienced referee who will ref the game how he sees it. It’s part of the game. We haven’t been penalised [for illegal blockers] this year, I don’t think. We’re doing alright.

“[Cleary] has got a target on his back every week. I don’t know how many games he’s played, 140 or something like that, so he knows what to do.” 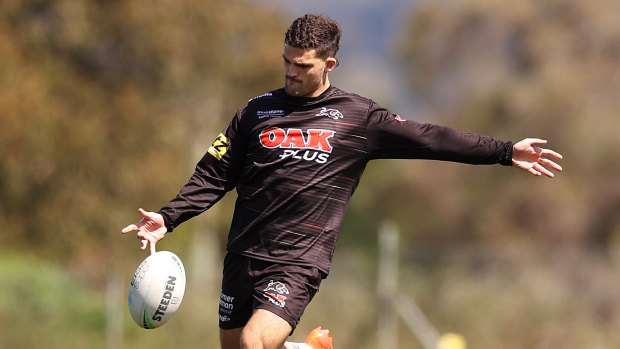 Nathan Cleary’s kicking game is at the centre of South Sydney’s concerns.Credit:Getty

An NRL document outlining referee interpretations reads: “Attacking players who loiter in and around the play the ball to block the path of defenders are to be penalised for the obstruction if, in the opinion of the referee or video referee, these players are deemed to in any way obstruct defenders”.

Panthers forwards James Fisher-Harris, Isaah Yeo and Liam Martin will act as Cleary’s bodyguards as Rabbitohs players vow to heap pressure on the halfback or risk being kicked to death in like Parramatta were during week one of the finals series.

Cleary’s performance in the qualifying final a fortnight ago was flawless, executing a barrage of bombs that gave Parramatta’s back three nightmares.

It was a stunning return from a five-week exile with the superstar halfback vowing to repay his teammates after a dangerous tackle saw Cleary suspended for Penrith’s final five games of the regular season.

“He spoke on the night about it, he was gutted about what happened and he’d felt like he’d let the team down. Since then, [he’s had his] head down and worked hard and continues to. I think he’s pretty determined,” Cleary said of his son.

Now the 24-year-old halfback will be tasked with using his kicking game to nullify the impact of Souths star Latrell Mitchell in the hope of forcing the mercurial fullback to empty the tank inside his own half and restrict his impact on the Rabbitohs’ attacking raids.

“He’s a big part of what they do. I think it’s great for the game that you guys are all talking about Latrell, he is a genuine superstar in the game. He brings a lot of interest to the game. Guys like him are perfect for this type of game,” Cleary said.

“He’s definitely good to watch, he’s dangerous, talented, very confident and he is a bit of a talisman for their team. He works really well with Cody [Walker] and young Lachlan Ilias has done a fantastic job and played really well throughout the finals series as well.

“That’s not even mentioning Cam Murray and Cookie [Damien Cook] and guys like that. We’ll have our hands full, but that’s what you’d expect in a prelim final. Our boys are super keen and really looking forward to it.”

Stream the NRL finals series live and free on 9Now.

Why preparation is serious business for Blues star Cook 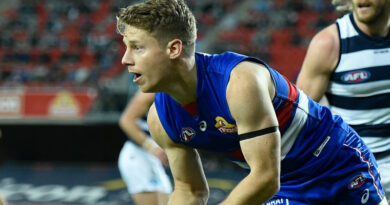