Phil Gould has delivered a subtle shot to social media users following on from the backlash sent his way during the NRL Grand Final.

Gould attracted a deluge of criticism for his work behind the microphone as the Melbourne Storm defeated the Penrith Panthers.

Social media went into meltdown as Gould continued to defend the Panthers and fail to heap praise on the dominance being displayed by the Storm.

The NRL icon responded to the backlash on Monday morning in an interview on radio station 2GB.

“They need to go back and listen (to the commentary) again. They only hear what they want to hear. There is a difference between bias and honesty, I’m always honest,” he said.

Later on Monday he delivered a swipe at the hypocrisy of social media with a simple retweet.

“Interesting thought of Twitter. I’ve seen several on here advocating Mental Health & calling for support (agree wholeheartedly). Then many of their tweets are just shit potting someone because they disagree with their opinion,” the tweet read.

Gould wasn’t having the criticism.Source:Getty Images

Gould coached the Panthers to their first premiership in 1991 and was the club’s head of football for many years until stepping down from his post in 2019.

The backlash commenced when Storm centre Justin Olam was awarded a penalty try in the opening minutes because Panthers centre Tyrone May kicked out with his leg to prevent his opponent from grounding the ball — which is illegal.

Nine commentator Peter Sterling said at halftime it was the right decision and plenty on social media agreed. At the time Gould said: “I don’t know what Tyrone May could have done any differently there.

“It is not what I would call indiscriminate kicking but the referee ruled he’s played at the ball with his foot.”

Gould also disagreed with a knock-on call against Panthers back-rower Viliame Kikau later in the first half.

“Where was the linesman on that play?

“Should have been play-on.”

The way Gould kept talking up the Panthers even when they went to halftime down 22-0 also grated with an angry Melbourne audience, which was keen to make its feelings known.

Gus isn’t happy with the criticism.Source:AAP

Peter Blunden tweeted: “Everything perfect so far with Storm’s Grand Final. Let’s hope it stays that way. But the anti-Melbourne commentary on Channel 9 has been nauseating. They are a disgrace. As usual.”

Shane Warne replied to Blunden’s tweet, writing: “Go on Peter!!!!!! How much do the NRL and that silly boss of theirs hate that the mighty Storm got it done again hahahah.”

Aussie tennis star Dylan Alcott said at halftime: “22-0 to the Storm but ALL the momentum with the Panthers according to big Gus Gould. Give it a rest.”

Fellow footy great Brendan Fevola said: “Phil Gould is kidding himself. Panthers on top 16-0 down,” along with some laughing face emojis.

AFL funnyman Titus O’Reily wrote: “Anti Storm comments from the Channel 9 commentary box? I need this consistency in my life this year.”

Ex AFL reporter Rohan Connolly called Gould “biased”. “This has got to be the most pathetic call of a major sporting event I’ve ever heard. How the hell does Channel 9 cop this?” he tweeted.

“Between Gould’s commentary and ‘Freddy Cam’ I may struggle to make it to full-time.”

Steve Zemek chimed in with: “Hey @wwos if I get 1000 likes will you pull Gus Gould from the commentary box?” 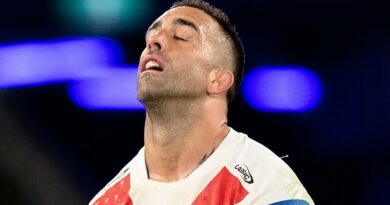