Home » Hannebery still sidelined but Saints hopeful of round one berth 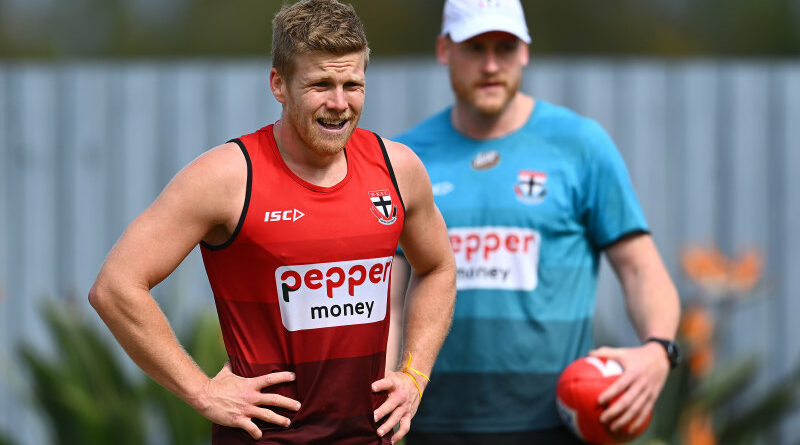 Injury-prone St Kilda veteran Dan Hannebery was away from the Saints’ main group at training on Wednesday but the club remains hopeful he could get back for round one.

Hannebery, 30, has played just 13 matches for St Kilda across two seasons with the club and has endured another interrupted pre-season because of a calf complaint.

He will not play in Thursday night’s AAMI series match against Carlton at Marvel Stadium, unsighted as the Saints went through a light session on Wednesday at Moorabbin.

St Kilda’s season-opener against Greater Western Sydney is just two and a half weeks away, but the club remains optimistic the former Swan will be available for that game.

“He’s nearing back to full training and he’ll be pretty close to round one I think. He’s looking pretty good. He’s obviously an elite player when he gets going, hopefully we can get him back for round one.“

In good news for St Kilda, important playmaker Jade Gresham is set to return against the Blues, his first appearance since a season-ending back injury last August.

“All the boys are pretty excited to get him back out up and running, he’s a gun when he gets going as well,” Butler said

Butler said Gresham would continue to be versatile.

Midfielder Zak Jones (hamstring) was running laps at training as he presses for a round one return against the Giants.

Butler has been buoyed by the off-season acquisition of his former Tigers teammate Higgins. Butler said he had helped convince Higgins to join St Kilda.

“He’ll probably play that high half-forward role and go through the midfield as well. He’s a pretty good little player and very smart, so he’s going to be handy whether he plays forward or midfield.”

Having broken their nine-year finals drought last season, expectations around the Saints are high. Butler said the feeling around the club was positive, but knows it is a long road back to the late-season action.

“It’s been such a really good summer. We’re really keen to get back out on the Melbourne deck. Obviously, we had a good year last year and hoping to build on that. Excited to be back in Melbourne and playing in front of a crowd again,” Butler said.

“Obviously we want to play finals again and push on further than what we did last year. But it’s still so early in the season and we’re pretty set on just starting the year with some momentum.”

Butler was among the competition’s best small forwards last year and is keen to back up that showing in 2021 to entrench his reputation.