Gold Coast veteran Jarrod Harbrow turned away Harley Bennell after the Melbourne player rocked up at his former teammate's home on Saturday.

Sources close to the situation confirmed that Bennell drove from the Demons' hub on the Sunshine Coast to the Gold Coast where he attempted to enter Harbrow's residence. Harbrow declined to allow Bennell into his house. Had Harbrow done so, he would have been breaching the AFL's coronavirus protocols. 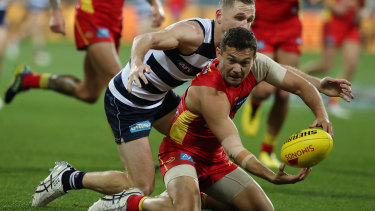 Harbrow contacted the Suns, who in turn told the league. Harbrow and Gold Coast have been cleared of any wrongdoing by the AFL, and there is no suggestion Harbrow broke any rules.

Barred by Harbrow, Bennell then went to a second venue. Bennell's actions in totality led the AFL to suspend him for four matches and fine Melbourne $50,000, which will come out of the Demons' 2021 football department soft cap.

Bennell, who turns 28 early next month, has played five senior games for Melbourne this year after being signed by the Demons as a pre-season supplemental selection period rookie pick. The midfielder/forward is out-of-contract and while the Dees are yet to formalise his future, there are grave doubts as to whether his AFL career will continue. 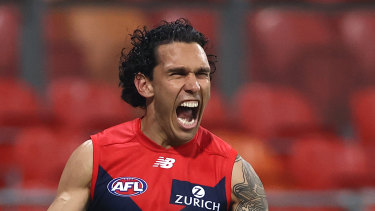 The West Australian had been given his third AFL chance by Melbourne after playing 81 games for Gold Coast – who took him as the No. 2 selection in the 2010 draft – and then two matches in four years for Fremantle where he struggled with injury and off-field issues.

Acutely aware of his chequered history before joining the club, Melbourne had been impressed with Bennell's behaviour until recently, suggesting that he had largely acted in an exemplary manner.

Harbrow, 32, is the Suns' games record-holder and had mentored many of the club's Indigenous players over the past decade. Bennell, who is also Indigenous, played alongside Harbrow for five years between 2011 and 2015. Harbrow had 10 disposals in his side’s heavy loss to Hawthorn at Adelaide Oval on Sunday.

Bennell's breach follows a June incident in which Melbourne pair Kozzy Pickett and Charlie Spargo broke the league's COVID-19 rules by travelling in an Uber. This was before the Demons left Victoria as part of the AFL's exodus from the state.

Bennell remains away from the rest of the Melbourne group after the Demons' season was ended by the Western Bulldogs’ win over Fremantle in Cairns on Sunday night. Where Bennell heads next remains to be seen, with the AFL determining that the Demon be sent home "as soon as possible" following his breach.

The Dees have a host of other out-of-contract players including Bennell's fellow SSP recruit Mitch Brown, who finished the season in the club's senior side and took 13 marks in a 20-disposal game against his former club Essendon on Saturday.

Former captains Nathan Jones and Jack Viney and speedster Jayden Hunt are among the other Dees whose futures are yet to be clarified by the club.

"This is a selfish act by Harley, and a clear breach of the AFL's protocols," Pert said.

"He has made a very poor decision, which is incredibly disappointing. He has not only put himself, his teammates and the competition at risk, but he has failed to live up to the values of the Melbourne Football Club."

Dele Alli urged to quit Tottenham in January window because of Jose Mourinho ‘message’
We and our partners use cookies on this site to improve our service, perform analytics, personalize advertising, measure advertising performance, and remember website preferences.Ok