Home » Rugby League » He’s just out of a Bali cell. Now Fifita could be the richest teen in Broncos’ history

Move over Payne Haas, your short-lived reign as the richest teen in Brisbane Broncos’ history looks like it’s about to end.

The Courier Mail reported on Wednesday night the Broncos are poised to offer Fifita a $3 million deal across four years at $750,000 per season to eclipse Haas’ $3.4 million contract over six years in order to secure the hottest property on the player market from 2021 onwards.

Stream over 50 sports live & anytime on your TV or favourite device with KAYO SPORTS. The biggest Aussie sports and the best from overseas. Just $25/month. No lock-in contract. Get your 14 day free trial >

That would make the 19-year-old Fifita the best paid teenager in the Broncos’ 31-year history.

If successful it would also fend off rival offers that have been tipped to approach $1 million per season, with clubs such as the Roosters, Rabbitohs, Warriors and Titans showing interest.

The mammoth offer from Brisbane comes after the most tumultuous period of Fifita’s life, in which he was locked up for three days in a Bali cell for allegedly assaulting a nightclub security guard before he paid at least $30,000 in a “peace agreement” to secure his freedom.

The Broncos sent welfare manager Adam Walsh to Bali and organised a lawyer to broker the compensation package for Fifita, with CEO Paul White embracing Fifita at Brisbane Airport upon his arrival home.

Oates: ‘Not that kind of kid’

NRL: Brisbane winger Corey Oates believes their could be more to the David Fifita story. Oates doesn’t see Fifita as the kind of player to cause trouble.

And the way the Broncos helped Fifita get home to Brisbane has the club in the box seat to secure his signature despite the seven-figure offers he’s attracting on the open market.

“I hope Dave doesn’t go to Sydney,” he said.

“I don’t know what it is about the Broncos but it’s a great club for players. It’s hard to move away from a club like the Broncos with their professionalism and what they do for their players.

“Everyone is going to throw massive coin at an up and coming star like Dave, he has shown a lot of talent, but hopefully he sees what I see at the Broncos and stays here for a long time.

“He would be appreciative of what the Broncos have done for him the last few days. Putting Bali aside, you get looked after in every department by the Broncos.

“I honestly feel this group is getting on well together too. We are similar ages and if guys like Dave stay, it will help us win a comp.”

Fifita has only played 35 games for the Broncos, but he turned out for the Maroons in all three State of Origin matches last season and was on the verge of representing Australia before he fractured his eye socket while captaining the Junior Kangaroos.

“I think Dave should stay at the Broncos,” Kaufusi said.

“I’m not too sure what clubs are chasing him but the key for Dave is where he feels comfortable and happy playing his football, and if that’s at the Broncos, he should stick around.

“If he feels he needs to get out of his comfort zone, then he might look around, but he will only get better as a player at the Broncos.

“He is going to be a superstar of the game. I had time with him in Origin camp this year and I was really impressed with his attitude and his willingness to learn.” 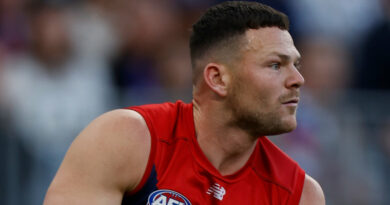 AFL teams and expert tips, round 15

He’s not ‘bulletproof’, but rebuilt Franklin is proving doubters wrong