John Longmire isn’t exactly counting down the goals until Lance Franklin hits the 1000 mark, like the rest of the AFL world. But he is keeping tabs on what people are saying about his comeback season, and how some of those calls have aged like milk.

“It’s interesting,” Longmire said. “Two weeks ago there probably was commentary that he was looking like he was struggling a bit. It’s very much week-to-week, isn’t it? It’s how you went on the weekend, that’s what the outside commentary is generally about.” 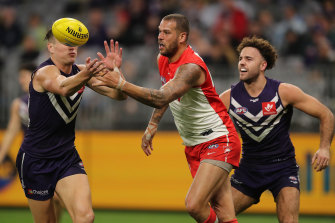 John Longmire is happy with how Lance Franklin’s fitness is trending.Credit:Getty

Two weeks ago, there were indeed some doubts in AFL punditry about Franklin’s fitness and longevity when he was held to just the fifth scoreless game of his career against Melbourne – a rusty return after two weeks out with bone bruising in his knee. But the way the champion forward turned back the clock with a vintage six-goal haul on the weekend was the ideal riposte.

Franklin pulled up well from the two-point loss to Fremantle, trained on Tuesday, and is firmly on track to be the SCG’s marquee attraction on Sunday when the Swans face Carlton in their annual Marn Grook game.

Longmire is typically circumspect about most matters publicly, and especially the Sydney Swans superstar’s slow return to full fitness and the expectations on him after a full year out of the game. But the coach allowed himself a wry smile when the inevitable questions on Buddy came his way.

“It always makes you feel a bit better after you’ve kicked six,” Longmire said. “It’s great to see, he was really out there moving a lot more freely and really enjoying that aspect of footy.

“Internally, we have a medium to longer-term focus for him … you just try and make sure you keep him on his program and get some continuous training and playing under his belt. There might be fluctuations from week to week, like any player in form, but we want to build a pretty resilient, robust body with him and that’s what the aim is. Doesn’t mean it’s bulletproof, but that’s what we’re working towards.

“We don’t expect him to play every game from here to the end of the year but you need a few games in succession to be able to get the momentum and rhythm going, and importantly the synergy amongst your forward line group – that’s just as important as anything.”

It’s not lost on Longmire that in Franklin’s two best performances of the season – on the weekend against the Dockers, and his five-goal turn against GWS in the Sydney derby – the Swans were beaten on both occasions. Disappointed with the third-term drop-off that let Fremantle into the match after leading by 21 points, Longmire was at least pleased that they came back and pushed them to the wire.

“You talk about it all the time – it does happen. It works out that way. Sometimes you drop off,” he said.

“We feel like we’ve improved that part of our game to be able to change the momentum, get back, give ourselves a real crack at winning and if we kick that last goal, you sit back and say what a great effort to come back. You fall two points short and everyone looks at it through a different lens.”

The Swans will take a reasonably settled side into Sunday’s clash with the Blues. Defender Robbie Fox is unlikely to play as a precaution due to a scratched eyeball, but his absence will be balanced out by the expected return of Lewis Melican from a hamstring injury. The in-form Justin McInerney is also in line for a recall after being rested.

As for Franklin’s march to 1000 career goals, Longmire would love to see it happen. Just don’t expect him to indulge in the building hype.

“I don’t know,” Longmire laughed when asked if he thought Buddy had 37 more goals left in him. “I understand the interest in it. It’d be a great achievement for him but it takes up probably zero per cent of my time during the week.

“On the weekend, he kicked six and we didn’t win. We’re always learning about making sure we have different avenues to goal, we need to be a really well-rounded even team, and we know that Lance is a big part of that too. That’ll take care of itself if we get everything else right. I know it’s an old saying but that’s the reality of it.”