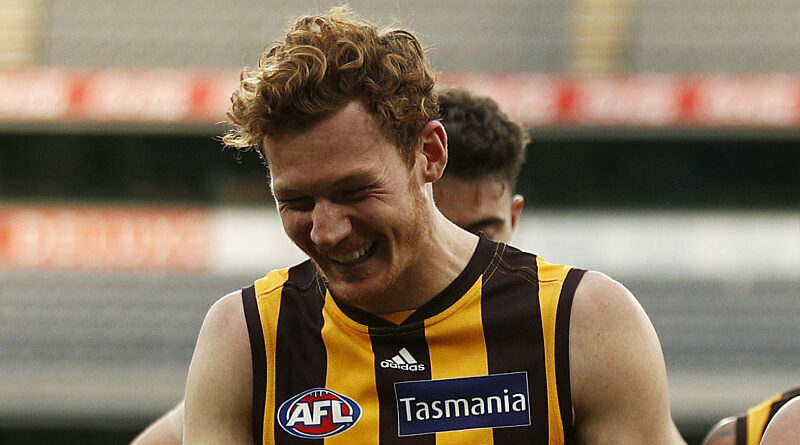 High-flying defender Tim O’Brien has opened up about the uncertainty and “different messages” players had to endure at Hawthorn this year but says he is ready to relish a new role with the Western Bulldogs.

O’Brien, an unrestricted free agent, has linked with the Bulldogs on a two-year deal after nine seasons with the Hawks, where the South Australian product played 97 matches but did not appear in a final, having been taken with pick No.28 in the 2012 national draft. 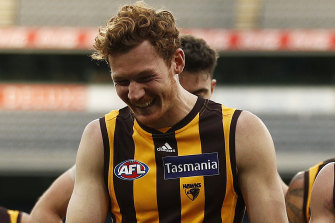 He has booted 73 career goals but spent the second half of last season in defence, impressing his future club in round 22 when he had 24 disposals, including 10 marks, in the Hawks’ 27-point win in Launceston.

It was a tumultuous year for the Hawks, coming with the uncertainty over coach Alastair Clarkson’s future, then a hastily arranged succession plan with Sam Mitchell, before Clarkson’s dramatic exit and Mitchell’s ascension to the top role.

O’Brien said the uncertainty had been “a bit messy” and difficult to negotiate for players, particularly for himself as he was coming off contract.

“All the different messages that were coming across, it was hard to get a bit of a grasp on exactly what was happening. At the same time, we just had to try and ignore it in a way and play footy.”

O’Brien had his exit meeting with Mitchell, but there was still no talk of a contract extension.

“It was all about the year that we have just had and, possibly, what was going to lead into next year,” he said.

What will happen next year is that O’Brien will have the chance to be an intercept-marking specialist across half-back for the Bulldogs. His athleticism and marking prowess are clear, reinforced when he was one of the three finalists for this year’s mark of the year for his grab against Greater Western Sydney at the MCG.

O’Brien had Luke Beveridge as a line coach at Hawthorn and is excited to again link with the man who became a premiership coach in 2016 and led his side into another grand final this year.

“That’s the exciting part about it is getting offered a two-year deal at a club that is genuinely contending. There are a lot of players around my age that have been together for a long time now,” O’Brien, who also attracted interest from Port Adelaide, said.

“Hopefully, in some ways, I can help the footy club take another step towards what we are all after.”

What appears clear that O’Brien won’t be the last senior player to depart the Hawks.

Led by Mitchell and football committee head Richie Vandenberg, the Hawks are working the phones feverishly in a bid to improve their draft hand. Their first-round selection is pick No.5, and they have left open the possibility of splitting that into two first-round selections.

This also means established stars Jack Gunston, Jaeger O’Meara, Chad Wingard and even Brownlow medallist Tom Mitchell are the on the table, should the right deal be offered.

Hawks president Jeff Kennett said he is “unsure” if Gunston, O’Meara, Wingard or Mitchell will be at the club next season.

Meanwhile, Bulldogs tall Jordon Sweet has signed a two-year contract extension, tying him to the club until the end of 2023.

AFL trades 2021: Stay across the moves, news and what it all means as our Real Footy newsletter goes daily for trade period. Sign up to get it here.