Walters raised eyebrows in league land last Sunday when he removed himself from the race for the position vacated by the mid-season sacking of Garth Brennan. 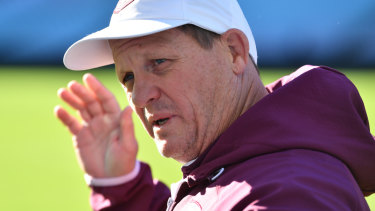 With Dean Pay seemingly safe at the helm of the Bulldogs, for now, Holbrook is firming as the coach of choice should Walters remain unavailable.

The 43-year-old has steered St Helens to a dominant Super League season in England. The club is five games clear on top of the table, winning 20 of their 22 matches so far this season.

If Holbrook is the man of the moment, he has quite the task ahead of him. There was no new coach bounce back for the Titans on Sunday, as they crumbled against a Storm team which was without almost all of their Origin stars.

"I think there were patches there, sometimes small, but patches there of what we have spoken about over the past five or six days," caretaker coach Craig Hodges said after the match. "There were patches, as you would expect this deep into the season, where we fall back into what have been bad habits.

"The scoreboard doesn't reflect it but I saw enough in there to know we are heading in the right direction but we still have a hell of a lot of work to do, obviously. That includes the system that we play with and the people that we play with."

Hodges dismissed a question probing whether he would put his hand up for the top job on a permanent basis.

"I don't want to keep going over it every time I sit in front of you," Hodges said. "Everybody that coaches in our game would love to coach NRL. Everybody has those aspirations. But the reality is if you have watched any of our football this year and where we are, we have far more important things which need to be addressed immediately than what I do or don't want to do with my career."

Several other coaches have applied for the role, including the Walker brothers, Jim Dymock and former Manly coach Geoff Toovey. But Holbrook and Walters remain the club's primary options.

When asked whether he would take the job if the Titans asked him to do so, Walters politely declined to comment.

‘Being in a cell is not great’: Fifita’s tough lesson after landing back in Brisbane