Things were very difficult for the del Bussos following the death of the mother of Reynolds' girlfriend, Arabella. 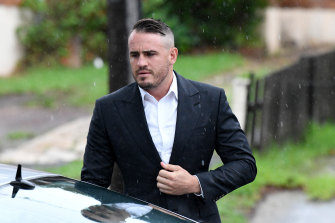 Vi was Arabella's "aunty". She reached out to Wests Tigers star Josh Reynolds, she said, because she needed a loan after spending all her money on the funeral. Feeling terrible for them, Reynolds sent her $2400.

Shortly after, Arabella said she needed money. She, too, had spent a lot of money on her mum's funeral. Reynolds gave her $1500.

Reynolds' suspicions were raised when he asked Arabella when Aunty Vi might be able to give the money back. Arabella would allegedly bristle and say she would pay it back herself, not Aunty Vi. Reynolds thought that was unusual, as Aunty Vi asked for the loan.

This is just one of many alleged occurrences during Reynolds' relationship with del Busso that he will rely upon when giving evidence in his court hearing on one count of assault of del Busso occasioning bodily harm.

How can an AVO be granted to someone who is not real?

Reynolds' legal team of Dan McGirr and barrister Margaret Cunneen, SC, are in possession of evidence they say shows Aunty Vi's bank account details were in fact details of an account held by Arabella del Busso.

Aunty Vi doesn't exist. Reynolds was allegedly "catfished" from inside his own relationship. Catfishing is when someone creates a fake online persona and lures another person into their world. The person believes they are real.

Several other boyfriends have provided statements to Reynolds' defence team claiming the same. One will state a "Jason Wells" would contact Reynolds outlining sad stories about del Busso and saying she needed money. Wells was del Busso.

We now also know Arabella del Busso is not real. She is Donna Preusker, born in Nowra on February 9, 1990. She turns 30 today.

Last night she hosted a big party at the Rialto Hotel on Collins Street in Melbourne.

Donna was raised by her mother Isobel Preusker and stepfather Matt Furlong in Traralgon, a two-hour drive east of Melbourne. Her mother provided a copy of her birth certificate.

On Thursday night I made these revelations on Nine News. On Friday, police announced they would review Reynolds' case "in light of new information which had come to hand" and were seeking to re-interview del Busso. This time she will be interviewed under her real name.

Her statement alleging Reynolds grabbed her arm during an argument on September 11 last year was signed under the name Arabella del Busso. As she did on her application for an AVO. This is the first problem for police as Arabella del Busso does not exist. Neither do her eight other aliases, which include Bella Donna di Donato, Bella di Donato, Donna Barcelona and Donna Melbourne.

Witness statements and AVO applications are legal documents. They cannot be signed under aliases. How can an AVO be granted to someone who is not real?

Another persona she uses is Georgia Barone. In Friday's Daily Telegraph, Barone was quoted defending her and said she was her sister. Preusker has no sister by the name of Georgia Barone.

Donna Preusker has one half-sister, Melissa Furlong, who is 19 and lives with her mum in Traralgon.

Barone is quite active on social media and seems to know an awful lot about what's happening with her "sister".

Reynolds appeared in Sutherland Local Court on Friday and still has a domestic violence assault charge hanging over him, and that is serious and needs to be treated as such despite the allegations above.

But the public airing of proof of del Busso/Preusker's background – including on-the-record interviews from her mother, step-father and ex-boyfriends – meant people heard the other side of the story. The matter still has a way to play out.

The above stories will be relied upon by Reynolds' defence and are contained in sworn statements. There are many more in those statements.

Meanwhile, Reynolds is free to play this season, which is the only decision the NRL could have made in the circumstances.