Home » Rugby League » How do we keep the Sevens converts in NRLW?

It was wonderful to see the immediate impact Australia's rugby union Sevens players made in the NRLW last week.

The likes of Charlotte Caslick, Ellia Green, Evania Pelite and Mahalia Murphy were outstanding, and we should get to see Grace Hamilton this week for the second round too. 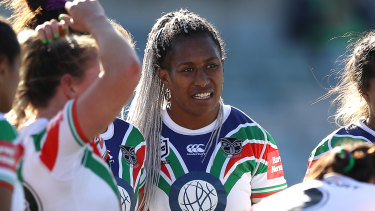 Australia’s rugby union Sevens star Ellia Green was a hit in her first NRLW match for the Warriors.Credit:Getty

Travelling the world as Australian Sevens players and aiming for an Olympic Games every four years is basically their job, yet it's still uncertain what impact COVID will have on the worldwide rugby union programs next year.

No doubt the Olympics is a huge drawcard for them, but in my opinion in rugby league we have the best overall experience of any oval ball sport.

We have state leagues, an NRLW competition, an annual State of Origin fixture and then an international schedule on top of that. We have to market that clear representation as best as we can, to offer this talent the chance to be able to represent at so many different levels.

To me the key to attracting – and retaining – better talent is by seeking to grow the number of teams and length of the NRLW season. This year COVID stunted any plans for a home-and-away season. It would have been great to have more than three rounds and the grand final.

But who is to say if we can't add either one or two teams next year and have them all play each other twice during an expanded regular season, some of the Sevens girls won't be thinking twice about playing again? It would only be a small step, but I think it would be a significant one.

I firmly believe we need to keep moving forward. This is the third year in a row where the competition has been capped at four teams, and even given the difficult financial climate we should be looking at expansion for 2021.

There has been such a high turnover of talent in the first three years of the competition so, in my mind, we have enough quality players to sustain extra teams. That comes back to having more space and opportunity for those that are good enough.

The more time these girls spend in a professional environment like an NRL club the better they're going to be and the faster they are going to improve. That's not just their physical ability, that's their mental capacity, game knowledge and skill set too. 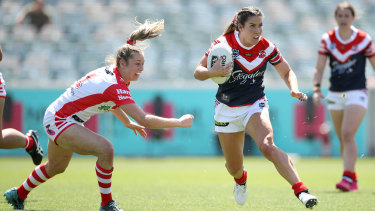 I'd like for girls to spend longer in these professional environments.

The answer might be in creating a competition she simply can't ignore.

Giants to argue Greene not responsible for Bontempelli bruising

Daryl Clark commits to Warrington with new contract until 2023

Marcus Rashford strikes late again to earn Manchester United another famous win in Paris
We and our partners use cookies on this site to improve our service, perform analytics, personalize advertising, measure advertising performance, and remember website preferences.Ok