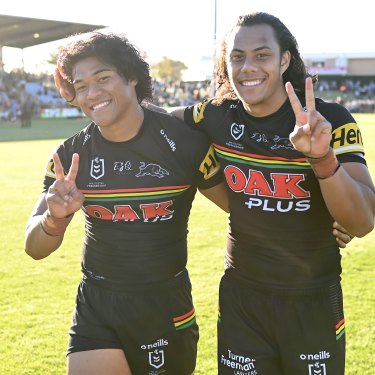 Let’s start with the boom box … Is that what they still call them? A boom box? Apparently so.

At Penrith, the boom box belongs to Jarome Luai, although his right-hand man Brian To’o is also in charge of it from time to time.

Whether it’s game day or training, in the dressing-room or team bus, the boom box is always blaring. Always.

The older members of the coaching staff don’t mind. “On a long day,” assistant coach Cameron Ciraldo smiles, “that boom box gets you through.”

Then this from coach Ivan Cleary: “Some people might not know how to take our boys, but they are who they are. We encourage them to be themselves. I’m not sure if they’re carrying the boom box around Blues training this week, but…”

But yes! Luai’s boom box has made the trip with him from Penrith into the NSW camp and onto the team bus.

“The boom box?” the rookie Blues five-eighth says. “I have been playing it. We’ve been listening to it on the bus. I just have to throw on some country now and then to keep the crowd happy.”

The infectious influence of youth at the Panthers has now found its way into the NSW side for the State of Origin opener against Queensland in Townsville on Wednesday night.

Can it turn this beat around?

NSW coach Brad Fittler and adviser Greg Alexander – both Penrith legends in their own right, of course – wrestled with how many of the unbeaten-this-season Panthers side to include in theirs.

Dominating the NRL is one thing. But Origin is a different arena altogether.

Luai, 24, makes his debut and starts alongside halfback Nathan Cleary, 23, who has played eight matches for his state.

To’o, 22, also makes his debut on wing, as does tireless back-rower Liam Martin, 24. Lock Isaah Yeo, 26, made his debut in the Blues’ 2-1 series loss last November.

The heavy Penrith influence is testament to the club’s commitment to its sprawling nursery of juniors and re-booted pathways system.

“I’m stoked,” the club’s legendary recruitment manager, Jimmy Jones, says. “When Phil Gould came back to the club [in 2011] as general manager of football] he said, ‘We’ll strip it right back’. He wanted everyone playing in Penrith colours, we wanted local juniors, and recruiting from the western corridor, building from the bottom up. Gus wanted them to win things and then come through the ranks to where they are now.”

Fittler wants the chemistry as much as the combinations formed at the Panthers to transfer into his NSW team. They’re relationships that have been formed over several years of playing against and then mostly with each other, from their early teens.

“They’ve all grown up together through school or junior footy,” says Ben Harden, the Panthers’ elite player development manager. “The reason they play like there are no cameras on is because they’ve been playing together like this since they were kids.”

Yeo was the first to arrive in Penrith from his hometown of Dubbo. He was first noticed by Jones at a junior carnival in Forbes when few rated him.

“The common theme of all these guys is they’ve had to grow up before their time,” Ciraldo says. “Isaah moved here as a 17-year-old. He was in first grade at 19. Captain at 26. He had to be a man ahead of his time.”

“He needs to play a certain number of minutes in trial matches before the next match,” he says. “Nothing fazes him as long as he’s prepared.”

Like Yeo, Martin is another “gypsy”, which is the affectionate label given to Panthers players from outside of the local area. 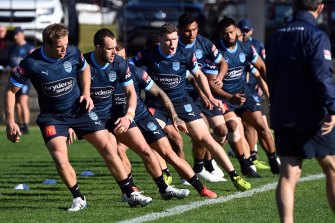 He hails from Temora in the Riverina and showed he was built for Origin from the moment he joined the Panthers’ SG Ball team.

His mother, Maxine, a school teacher, would drive up on a Friday morning while her son would study in the car.

Then he’d terrify everyone on the training paddock.

At his first contact session, he picked up teammates much bigger than him and dumped them on their backs. As the players walked to the sideline for their first drink of water, the coaching staff took notice of what the other players were saying.

“Who the hell is that kid from the bush?” they muttered to each other.

When Martin did a boot camp with the under-20s side a few years later, the instructors were taken aback.

“The army bloke thought this guy could be elite special forces,” Harden laughs. “He was an animal, the way he trained, even back then. We learned he was doing road runs carrying water packs back in Temora. We knew early just how much this kid wanted to play.”

“Just crazy,” he smiles. “He’d take pre-workout before the game and he’d be at the scrum and his legs would be shaking. We’d all be thinking, ‘Who is this mad country bloke?’ He’s calmed down … a little bit.”

To’o wasn’t as easily identified as the others. A St Mary’s junior, he first came into the system via the under-17s development squad and summer program.

In time, the Panthers came to learn of his toughness as much as his ability. After playing a match for his school, he was called into the under-20s side, caught the train to Penrith and limped into training.

“My leg’s a bit sore,” he said, dismissively. Then scans revealed a fractured tibia.

A year later, he scored an 80-metre try then hobbled back for the kick-off. Scans revealed he was suffering from grade-two syndesmosis. He was sidelined for the next month.

To’o has been the revelation of the Blues camp this week. Almost every member of the coaching staff you bumped into raved about the Penrith flyer, who also shocked seasoned journalists when he sidled up to them after a training to inquire how they were.

“He’s just got so much better as a player,” Nathan says. “His willingness to learn, while being a real character and humble, has brought us [the Panthers] all together.”

The easy assumption, when you look at what Nathan has already achieved in his career, is that he’s always been earmarked for what he’s starting to achieve.

It’s wrong. The player everyone talked about from an early age was Luai.

“Romy was the gun, the talk of the town,” Nathan says. “I hadn’t heard about him because I’d been growing up in New Zealand [when Ivan was coaching the Warriors]. I was playing for Brothers against him one day [against St Mary’s] and they scored about 50 points on us. He set up 10 tries. He was a freak then as much as he is now. He was skinnier then, but he had the left-foot step. Fast and so hard to tackle.”

The first time the pair played junior reps together was a Harold Matthews trial match, which Ivan recalls vividly because they lost heavily to Parramatta.

“It was probably one of the first times Romy [Luai] had lost a game,” he says.

Another notable defeat was the SG Ball grand final in 2014 against the Roosters when Nathan’s field goal attempt hit the post and a young’un called Latrell Mitchell scored a length-of-the-field try in the final minute to secure the win.

But since Luai’s arrival in the NRL last year, defeats have been rare.

“Nat and Romy have lost two games when playing half and five-eighth together,” Ivan says. “Parramatta [in round five last year] and the grand final. I’m not sure how many halves have played together since they were 15 years ago but it’s quite an advantage.”

Luai was part of last year’s Blues squad but didn’t play a second. When he returned, he said something to Ivan that seems prophetic now. 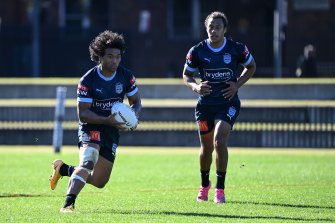 “I never thought I’d be good enough to be in that environment,” Luai told him. “But now I do.”

Standing in the rain and chatting at Blues training earlier this week, Luai seemed anything but overawed by what’s ahead of him.

“Nathan is the calming influence I need,” he says. “He just lets me be the player I want to be.”

Then the smile: “But I’ve passed on my fashion sense to him”.

Origins are never determined by one player, let alone five of them, but there’s some pressure on all their young shoulders.

Time will tell if old-school Usher songs will be booming out of the Blues dressing-room late on Wednesday night.

Bring it on, they say. When the players were told on Sunday they had been selected, among the first people to message Luai was Nathan. 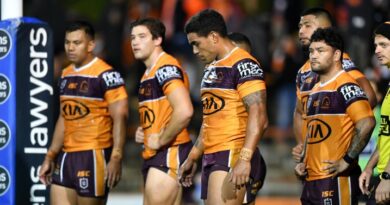 The reality of extended mediocrity is descending on Broncos fans