Home » Rugby League » ‘I felt that little bit of guilt’: Why Papley asked to be traded from the Swans

Sydney star Tom Papley has opened up about his father's struggles with bipolar disorder, explaining how they led to the Victorian asking for a trade to Carlton at the end of 2019.

Papley was set to join the Blues on a long-term deal 12 months ago, but the trade fell apart when Essendon refused to trade Joe Daniher to the Swans.

It meant Sydney decided to hang on to Papley and his desired move home was blocked. 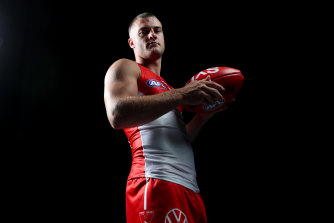 Tom Papley requested a trade to Carlton, but the deal did not get done.Credit:Janie Barrett

The livewire small forward from Bunyip spoke in depth publicly for the first time about his father's illness and what lead to him asking to be traded.

"A few times that year [2019] I went home … during the year I had a few beers with the old man and had a bit of an argument, I suppose," Papley told the podcast Dyl and Friends, created and hosted by former Blue and Giant Dylan Buckley.

"He's actually got bipolar, so that turned into a little bit of an episode.

"I've never really spoken about it … not many people actually know.

"So he has a bit of an episode, I sort of felt guilty, like it was my fault."

Papley said he and his dad were fine the next day, but the argument prompted him to seriously consider moving home to be closer with his family.

"Growing up, he's always been in mental homes … I didn't really know until later in my teenage years what was really going on … so I sort of felt that little bit of guilt.

"At the end of the day I just wanted to be back home … you want to help mum and be there for your brother and sister so I sort of felt guilt and that it was my fault.

"I kept it inside, I didn't really tell anyone, I told my manager obviously just to speak about it."

He said later in the year, he asked for a trade and it didn't happen.

"But now I'm back at the Swans and I'm loving it and my old man is flying."

Papley has since become an ambassador for Mindful Aus, which supports and encourages people to "put wellness back in their own hands".

Leeds clinch late win over Everton after first Premier League goal for Raphinha
We and our partners use cookies on this site to improve our service, perform analytics, personalize advertising, measure advertising performance, and remember website preferences.Ok