Home » Rugby League » ‘I get to be a dad’: Warriors hope emotional homecoming will rekindle Johnson’s career

The Warriors are hoping Shaun Johnson’s long-awaited homecoming, and the chance to reunite with a daughter he has barely seen in eight months, will rejuvenate the veteran half amid conjecture about his future.

Johnson and his Warriors teammates were part of emotional scenes on Tuesday as the club officially returned to its Mount Smart base, embracing New Zealand-based staff after two-and-a-half years on the road.

A sold-out crowd of more than 26,500 will be at Sunday’s clash with Wests Tigers, the Warriors’ first home game in more than 1000 days, having relocated to Australia due to pandemic restrictions.

Johnson has struggled on and off the field this season. He signed with the Warriors on the basis he and his young family would return to New Zealand, only for the club to shift to Redcliffe late last year.

A drop in form prompted suggestions of an early release or retirement from the 2023 part of his deal. But Johnson, who had seen his wife Kayla and young daughter Millah for only “five or six days” since he left New Zealand last November, said a weight had been lifted.

“Watching my little one grow up through FaceTime wasn’t ideal. We’ve all had our different challenges,” Johnson said. 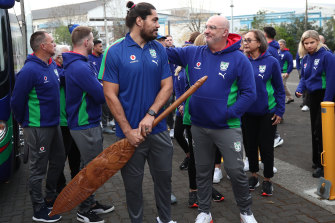 “Not having them in my corner for the year has been challenging at times. I’m just so grateful that I am in this position right now and get to be a dad and share this week with my family.

“Every sort of tough day you have had (in Australia) brings you back to this moment right now where we are home, with my family and I get to be embraced by the people I play for.”

CEO Cameron George told The Herald that Johnson has looked a “different man” since returning to New Zealand last week, and that the 31-year-old had been particularly mindful of other players and staff who have played on the road since mid-2020.

“We’ll take it as we go but, at the moment, Shaun’s definitely contracted for next year and is a great part of our club,” George said.

“I wish nothing but the best to Shaun for the rest of this year and then he can decide at the end of the year.

“Right now he’s contracted for next year, we haven’t talked about anything less than that. We’re here to support Shaun; if he needs to talk, we will, but we’ve been focused on this week and this period. Getting home makes such a difference for everyone.”

Meanwhile, the club’s search for a head coach will ramp up this week after Tongan and St Helens mentor Kristian Woolf indicated his preference is to return to Australia next year.

Woolf had emerged as a leading candidate for the Warriors role and met with owner Mark Robinson last week. Cowboys assistant Dean Young, Sharks staffer Josh Hannay and former NRL coaches John Morris and Paul Green are believed to still be in the club’s thinking. 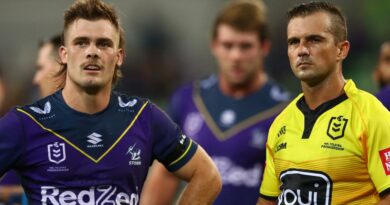 Brownlow winner Neale reflects on journey, now that his name won’t be forgotten