Female umpires have described cases of sexual harassment from spectators and fellow umpires that caused them to consider quitting, as the AFL faces a desperate shortage of umpires at community level.

The girls and women describe their experiences in a research paper by Dr Victoria Rawlings, a lecturer in education from the University of Sydney, and former AFL community umpiring development manager Damian Anderson: Girls and women in Australian football umpiring: understanding registration, participation and retention. 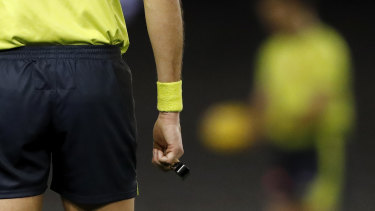 Some female umpires have described cases of abuse and harassment from spectators and even other umpires.Credit:AFL Photos

The paper, funded by the AFL and published in August last year, found that female umpires experienced “exclusion due to their gender in material ways, including in relation to change rooms and written and verbal communication”, and “had their umpiring ability questioned by fellow umpires, spectators and player coaches due to their gender, causing them to question whether to continue umpiring”.

While some harassment related to their ability, other more overt sexual harassment “often manifested in an aggressive masculine heterosexuality”, said the study, which was based on focus groups and interviews involving 27 umpires of diverse ages and ethnicities.

A state league umpire identified in the study as Emily described an incident at training in which she overheard a comment from a fellow umpire.

“I openly overheard a group of guys talking about my boobs at training one night… I was walking up the stairs, and I overheard them being literally like, ‘Oh my god, have you seen Emily’s tits?’ And I turned around and I looked at them, and I was like are you serious? Like that’s what you’re going to say? That’s what you say at training? And it freaked me out a little bit to be like my god, what do you say, like, as a group behind my back?”

Another umpire, Anna, said she was made to feel uncomfortable by a coach who “would always try to talk to me and meet up with me outside of training”.

“… So, I just stopped going to training after that, so that was probably the worst experience I had when I was targeted.”

A third umpire, Elektra, received unwanted messages from fellow umpires. “I used to receive messages of nudes that other umpires would send to me. And umpires during games would inappropriately touch me, like when we’re umpiring together and things like that. So, that’s what made me quit that level of umpiring [state league] because I thought it was too inappropriate, and I didn’t know what to do about it at the time.”

“I was walking up the stairs, and I overheard them being literally like, ‘Oh my god, have you seen Emily’s tits’?”

One young umpire said she felt safe from abuse when her father accompanied her to games, but was targeted when her mother had taken her to the game.

Julia, a community umpire from NSW/ACT, said: “I think you get a bit sick of it. By ‘sick of it’, I mean like one, not seeing a clear pathway, having either gendered comments directed towards you and … just generally being looked down upon as an umpire and you just wonder why you’re doing it.”

Outgoing AFL chief executive Gillon McLachlan has this season led a crackdown on player dissent directed at umpires at AFL level, motivated by the need to address the crisis in community football which is 6000 umpires short of the numbers needed. Girls and women represent about 10 per cent of umpires in Victoria.

The AFL said in a statement to NewsCorp the research would form the basis of initiatives in the “Women and Girls Game Development Action Plan”.

“The initiatives in the plan are designed to increase representation of women and girls in all parts or our game from players to umpires to coaches and administrators and are aimed at ensuring a safe, welcoming, and inclusive environment for women and girls, including to lift the number of women umpires to 40%,” the statement said.

The paper’s recommendations include education focusing on gender equality, a system for umpires to report harassment, inclusive change room environments, and investigation of a parallel pathway for female umpires.

“In reading this research, I felt frustrated that girls and women in umpiring roles are still facing the same obstacles and challenges that I faced almost 16 years ago; I had hoped things would have improved. They certainly should have,” she said.

“Umpires face many challenges- and these challenges are even more complex and compounded for girls and women in umpiring. This research shows clearly what we know through experience- that the umpiring club environment is critical for recruitment and retention of umpires, and more importantly, for their mental health and wellbeing.” 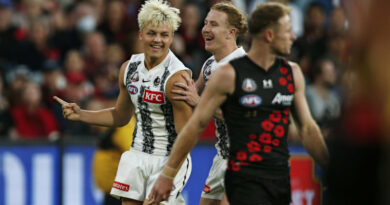 Two marches, one winner, no losers: Anzac Day day at the footy