Home » Rugby League » ‘I was becoming a liability’: why Napa couldn’t play on with same injury as Foran

The early diagnosis on the Queensland forward is syndesmosis, or a high ankle sprain, although Napa didn't believe it would require surgery as Foran has undergone. 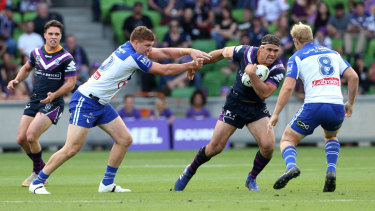 Dylan Napa was an early loss for the Bulldogs and said he ‘felt like a cat’ for going off.Credit:AAP

He left AAMI Park on Sunday afternoon in a moon boot, with further scans scheduled for Monday back in Sydney.

"I'll have a scan to confirm the injury and reassess from there," Napa said. "I don't think it's nearly as bad as Kieran's but fingers crossed as he's out for three months, so hopefully I can be back within a few weeks."

The 26-year-old, who has been in impressive form since joining the club this season, hurt the joint in the very first set while tackling Storm lock Dale Finucane.

He bravely attempted to play on but realised he was becoming a liability for his team.

"I was thinking about Kieran and how he played the whole game so I was feeling like a bit of a cat going off but I was becoming a liability in defence and I could hear the Storm saying, 'Get at Napa' and I didn't want to let the team down."

Bulldogs coach Dean Pay said losing Napa early was a big blow for his team, which really counted in the back end as the Storm roared into the lead.

"I was so proud of the boys who picked up the slack for the rest of the game."

The damning statistic behind the Bombers’ awful round one loss 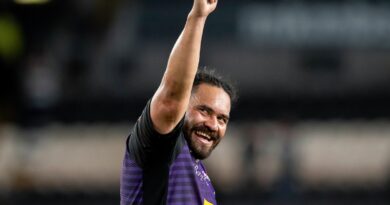 Swinton to be renamed Manchester Lions to broaden appeal of club