Home » Rugby League » ‘If he didn’t get up claiming a penalty, I’m not in this position’: Banned Dog slams Tino over gouge claim

Banned Bulldog Corey Waddell maintains he is not an eye gouger and wonders if Tino Fa’asuamaleaui had not complained to the referee, would he be spending the next five weeks on the sidelines.

Waddell became just the fourth NRL player in the modern era to be suspended for gouging, an act widely regarded, along with biting, as the worst in rugby league.

Melbourne’s Josh King was placed on report on Friday night for putting his hand around the eyes of Warriors forward Jazz Tevaga, but was not charged on Saturday.

Canberra’s Hudson Young was suspended twice for a total of 13 weeks in 2019 for gouging, George Burgess was outed for nine weeks in the same season while playing for Souths, and Luke Thompson copped a month in 2020.

Waddell appeared via Zoom at Tuesday night’s NRL judiciary hearing and repeatedly told NRL counsel Patrick Knowles he never placed his fingers in the eyes of Fa’asuamaleaui during the 36-26 win over the Titans.

When the two-man panel of Dallas Johnson and Bob Lindner found him guilty, Knowles urged Waddell to be given a five-match penalty, largely because he had shown “a lack of contrition”. 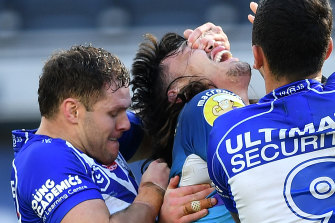 Corey Waddell’s hands on the face of Tino Fa’asuamaleaui.Credit:NRL Photos

Speaking for the first time since the ban, Waddell told The Sun-Herald the hardest part was knowing he would be unfairly branded a “gouger”. His family had already been exposed to the vitriol directed at Waddell on social media.

A frustrated Waddell, who has nailed down a starting back row spot for the Dogs – and was looking forward to helping the Belmore club claim a few big scalps in the run home to the finals – said: “If Tino doesn’t get up and carry on, I’m not given a five-week holiday. I got the tackle wrong and shouldn’t have had my hands in his face, but I never gouged him.

“I’m now sitting on the sidelines for five weeks for something I didn’t do. 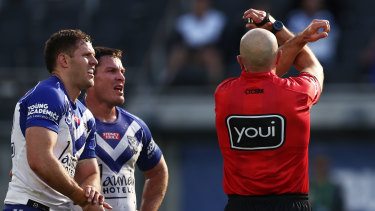 Corey Waddell was placed on report during the win over the Gold Coast.Credit:Getty

“If you’re gouged, you’d be staying on the ground and your eyes would hurt. But his eyes were fine and he didn’t even go off. He was too worried about making the point I had gouged him.

“Tino was trying to win a penalty for his team. The Gold Coast were trying to win the game. I can’t knock him for that. He also said it was an accident after the game.

“But if he didn’t get up claiming a penalty, I’m not in this position.”

Waddell said he was executing what is known in the game as a “seatbelt tackle”, where two players hold up the ball carrier, then a third player comes in from behind and places one arm around the torso and uses his hip to help drag him to the ground. 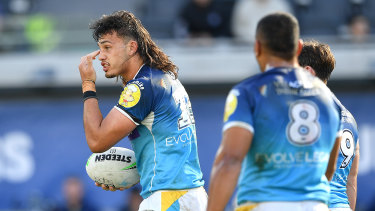 A photo of Waddell’s fingers appearing near the eyes of Fa’asuamaleaui was the key piece of evidence used by the NRL. Ghabar argued on the night one image could be “deceptive”.

“The photo didn’t look good, but you’re talking about a split second during that whole tackle,” Waddell said. “I said to the club and our lawyer [Nick Ghabar] if I have to cop a couple of weeks for having my hands in his face, fair enough, but just make it clear I’m pleading not guilty to the gouge because I never did it.”

Waddell spent this week helping his teammates prepare for Sunday’s trip to Newcastle.

A Penrith junior who was first coached by Cameron Ciraldo in the Panthers’ under-20s side, Waddell welcomed speculation Ciraldo was the preferred candidate to head up the Bulldogs next season. 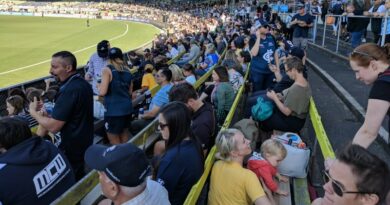