Home » If you don’t get the crackdown on high tackles, then rugby league doesn’t need you 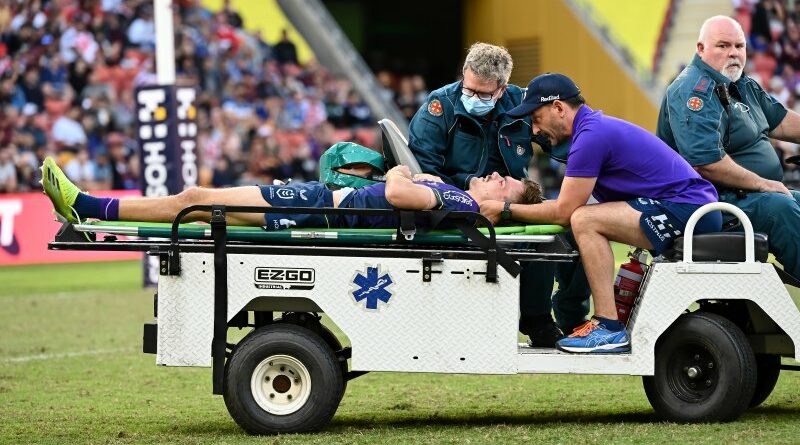 Those criticising Peter V’landys for rugby league’s current crackdown on high tackles simply don’t get it.

You can only criticise someone for doing something you don’t like if there was choice involved. And who truly thinks V’landys actually has any choice in the matter? Is there any part of “The NRL is facing an existential threat,” you don’t understand? You really think it is possible to keep going as they have been, with great protocols and nice press releases, even while clearly concussed players are still given HIAs and not taken from the field week after week after week? You think the NRL can go on like that, as they have been for years – see my 100 or so columns on the subject – and not get in more shit than a Werribee duck? 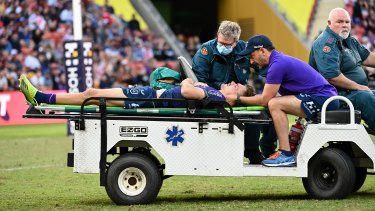 The NRL must make an attempt to consign scenes like Ryan Papenhuyzen being carted off after being concussed to history.Credit:NRL Photos

And a moment’s pause, while the dinosaurs decry the loss of the game they love, now being ruined by the administrators listening to doctors and lawyers instead of them.

Again, tell us, please do: what choice does V’landys have?

The simple equation is this: the more you ignore the doctors and lawyers, the greater the existential threat is. The more you listen to them, the more assured is the future.

But, as I have also always said, far greater than the legal imperative to get this right is the moral imperative.

Who, in good faith, can allow the game to go on as it has been when the evidence keeps building on the devastating effect that playing it like that has on them?

My erstwhile colleague Paul Kent has written in recent times of two of the greats of yesteryear, Johnny Raper and Billy Smith shuffling past each other in the same nursing home, and not recognising each other, of Johnny Sattler recently having to be told by his son Scott 50 times, how to sign 50 successive photos. While such anecdotes of that generation are myriad, more troubling still are the ones we hear from much younger former players, of blokes in their 40s and 50s in real trouble.

Yes, these were men who played at a time when the game was a lot more violent and they no doubt took far more king hits and stiff arms than the current generation. But they were also so much smaller back then! When you see the footage of them playing they often look like kids compared to the behemoths that keep running into each other today. And of course it’s not just the bigger they are the harder they fall, it’s the bigger they are, the more concussive force there is in each tackle and in each contact training session.

Just what is the result going to be on the current crop in 30 years time if they don’t get it right? It does not bear thinking about.

As to how the NRL must deal with it, the answer is precisely as I have been banging on about for a decade, and precisely as they appear to be doing now: reduce head impacts by sending off those responsible for them; change the rules so we see more running and less devastating impacts; actually observe the protocols and get concussed players immediately off the field.

These changes are not a threat to rugby league. They are the only chance the game has of surviving. It’s all very late, but, well done Peter V’landys and Andrew Abdo.

What remains is to round up the dinosaurs who don’t get it, and get them out of the game. Coaches, players, commentators: get with the program, or get out. It is a legal and moral imperative.

‘We are made of the right stuff’: Davis