Latrell Mitchell is back in the country and targeting a State of Origin return after a two-week stint in the US to treat his injured hamstring with renowned specialist Bill Knowles.

Mitchell flew into Sydney from Los Angeles on Thursday morning following 16 days stateside to repair the tendon tear in his left hamstring that has ruled him out of the Blues series opener next week.

A South Sydney return could come as early as next Friday’s clash with the Titans on the Gold Coast, though Mitchell said he wouldn’t pencil in a comeback date until he returns to team training.

“I can’t wait to get back to the boys and start training. Obviously we’ve got the bye this week and Origin, so good luck to those fellas, but I’m keen to get back in a team environment.”

If Mitchell sits out the round 14 trip to the Glitter Strip a return the following week against St George Illawarra would still give him an 80-minute hit out before Origin II in Perth on June 26.

Mitchell documented much of his training with Knowles and travels throughout the US via social media, while the Rabbitohs also sent a member of their digital media department along to film their star fullback’s recovery as well.

“I’m a circus freak now,” Mitchell quipped of one video that showed him twirling hula hoops on a bar while balancing on a bosu ball.

“He’s worked with the best, (Knowles’ record) speaks for itself,” Mitchell said. “Bill’s a great bloke and he was awesome to work with over the last two weeks. He made it easy being away from home.

“It was a bit different but it’s just something I can hold onto for the rest of my career I think. I’m pretty excited to see where it goes.”

Knowles’ fee for Mitchell’s two-week stint with him reportedly clocks in at just under $10,000 and is counted under medical expenses rather than the Rabbitohs’ football department cap.

Mitchell’s absence from Brad Fittler’s side, along with fellow 2021 backline star Tom Trbojevic, has seen Kotoni Staggs called up to partner Jack Wighton for NSW.

Mitchell politely declined to comment on the surprise axing of his close friend Josh Addo-Carr from the Blues line-up. 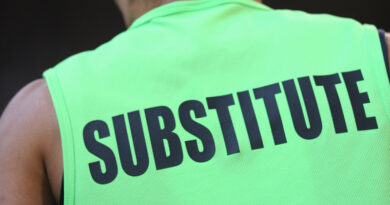 To sub or not to sub? AFL to make call on 23rd player