New Collingwood coach Craig McRae says he’s “pretty pumped” at being given the opportunity to coach the Magpies after a long apprenticeship as a player and assistant coach at four clubs.

The 47-year-old, who joins the Magpies on a three-year deal, was not putting a ceiling on what the club could achieve, declaring he wanted the team to become as “good as we can as quick as we can”.

He told the players on Wednesday that his appointment offered them opportunity and possibility after the team’s dip from sixth to 17th in 2021.

McRae played in three premierships in 195 games as a small forward at the Brisbane Lions under Collingwood premiership coach Leigh Matthews before coaching stints at the Lions, the Magpies, Richmond and Hawthorn.

He told Magpie members he understood that “it is going to be difficult to please all of you at the same time but I just want to make sure you understand we are going to work really hard to develop winning habits and behaviours that [ensures] you will be really proud of us, win, lose or draw.”

McRae, who becomes Collingwood’s third coach since 2000 following long stints from Mick Malthouse and Nathan Buckley, said he decided to chase the job as soon as he recognised he was a good fit for what Collingwood needed. He took the job confident that regardless of the results of a board election at December’s annual general meeting his appointment would be supported.

Renowned for his development coaching, he said he was determined to build strong relationships across the club, describing himself as a culture builder who was good with people.

He remained non-committal about whether Scott Pendlebury would remain as skipper but said the Magpies great had earned the right to make that decision himself. He said he would speak to each player individually in the coming weeks, including out-of-contract forward Mason Cox who returns the US on Friday.

Former Lions teammate and coaching colleague Justin Leppitsch is expected to join McRae in the coaching set-up with several further appointments to be made in coming weeks.

“This is one of the exciting parts of this opportunity that you get to build a really good team around you … ‘Leppa’ [Leppitsch] is a great friend of mine, but I just want to make it clear I am not going to just bring my best mates in,” McRae said. 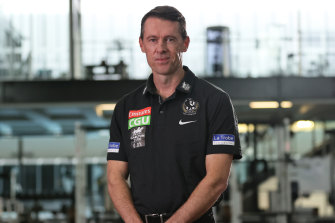 “That’s just not how I operate. I want a diverse coaching group. I want the best people in their roles. Having said that, ‘Leppa’ is the best I have worked with in regard to a defensive structure.”

Interim coach Robert Harvey has departed while Brenton Sanderson will not be part of the coaching team in 2022, although football manager Graham Wright said the club was exploring with Sanderson whether he might remain in a new role.

“The success that Craig has been able to share in, as a player and a coach, and the quality of the programs he has worked in say a great deal about him,” Korda said.

“So does his dedication to the craft of coaching. Craig has built an incredibly impressive and holistic coaching resume that says he is widely educated as a coach, one who teaches the game and develops players, builds connections, commands respect and has a sharp tactical eye. He has also coached his own teams.

“Given the course we set as a club 12 months ago, which was to recalibrate the AFL program and introduce a lot of young talent over a two- or three-year period, we see it that Craig’s attributes complement our profile extremely well.

Korda indicated that a decision on his presidency will be made after members determine who is on the board at the AGM in December. He said the board would elect the president after the composition of the board was known.

Former St Kilda and Dockers coach Ross Lyon is considered the favoured candidate for the position and spoke to club president Luke Sayers on the day Teague was sacked. Former Hawk coach Alastair Clarkson’s management said last week that the four-time premiership coach would not coach in 2022.

Super League: Scrums may be scrapped temporarily to reduce risk of coronavirus spread