Home » In-form Titan out for at least two months 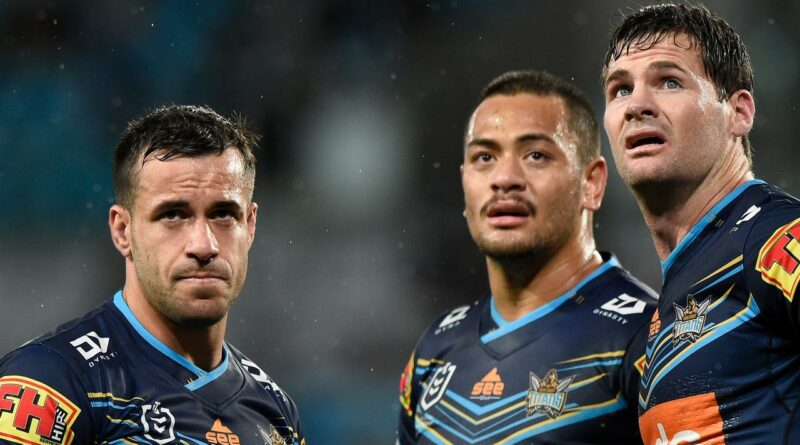 Corey Thompson, one of the most consistent performers in the Gold Coast Titans’ turbulent start to the season, will be sidelined for at least two months with an ankle injury.

The Titans confirmed on Monday that Thompson is set for surgery on his left ankle after picking up a syndesmosis injury in his side’s loss to the Broncos on Friday night.

“The best case scenario is an eight week return to play.”

At the earliest, Thompson could return for the Titans’ round 16 match against the Raiders.

The injury will likely keep the 30-year-old out of State of Origin conversations, with some pundits touting him as a chance to make Queensland’s extended squad this series.

Thompson fends off Joe Ofahengaue in his second game as a Titan. (AAP Image/Dan Peled)Source:AAP

Thompson’s injury could see 24-year-old Greg Marzhew handed his NRL debut against the Tigers in round nine.

Alternatively, coach Justin Holbrook may opt to move utility Tyrone Peachey into the centres, pushing Phillip Sami to the wing.

Hoare said on Monday that injured Titans Sam Stone, Sam Lisone, Jonus Pearson and Patrick Herbert are all progressing well, but none will line up on Saturday.

However, the side will be bolstered by the inclusion of star recruit Tino Fa’asuamaleaui, who returns from a two week suspension this weekend.

Corey Thompson joined the Titans from the Tigers midway through 2020. He deputised at fullback for the injured AJ Brimson on five occasions last season but cemented a spot on the wing towards the end of the year, carrying that role into 2021.

He is the club’s second-highest try scorer so far this season, chalking up six four-pointers from his eight appearances.

LISTEN: Clash of the Codes revisited with Terry O’Connor and Jon Sleightholme