Home » Rugby League » In, under, out and about as Pies’ Adams matures

Taylor Adams has been Collingwood's most consistent midfielder in 2020.

When injury and suspension hit the Magpies, the bullocking Adams stood up to keep the season on track. 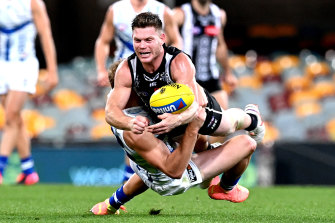 In the thick of it: Collingwood star Taylor Adams.Credit:Getty Images

That the biggest match in close to a decade between the two clubs is being played in Brisbane doesn't bother Adams, although he concedes it's akin to running the Stawell Gift in Gundagai.

"It doesn't feel like a traditional rivalry game, does it?" Adams said.

It will when the ball is bounced, however, and loungerooms across Victoria become places of quiet desperation with Adams certain to be at the centre of things.

Adams knows that and will be chasing the football like a greyhound chases a lure, however he will be a different beast to the one who played against the Blues in a Collingwood jumper for the first time as a 20-year-old in 2014.

He has become less obsessed with his own game, taking a wider view of both the world and his role when he is at the football club.

On Friday he sat by the pool for a time reading a memoir of comedian Greg Fleet that Jordan Roughead had recommended to him, an absorbing tale of family dysfunction and addiction.

He is studying a Masters of Business Administration at Deakin University and has invested with teammate Levi Greenwood in a business located in Port Melbourne and Point Cook called 12RND Fitness.

He loves a hit of golf and took the time to watch the boxing bout between Tim Tszyu and Jeff Horn on Wednesday night. He remains in contact with long-time mates from Geelong, near where he grew up in Mt Duneed.

"My outlook on football has changed," Adams said. "[There are] other things in my life I am really passionate about now and I put time and energy into that. That feeds my passion for footy and training and my teammates and the footy club."

Mention the two dogs, Alby and Charles, that Adams and his partner Ellie own and have left back in Victoria, and the tough exterior disappears into the ether as he explains how Charles will have gone from a puppy to a dog by the time he returns.

Spending time away from the club productively allows him to focus on helping others when at the club.

No one is perfect in doing that and Adams is the last to suggest he is but his empathy is genuine and, as with his kicking, he hits the target more often than not nowadays (Adams has kicked 8.1 this season, a good return for a midfielder who is yet to kick 10 goals in a season).

With Carlton looming and Sidebottom gone the Magpies are in for a battle. Adams knows the vice-captain will be impossible to replace directly but he is confident that those coming into the side will keep the team strong.

It's a team game and Adams knows that now better than he ever did as the Magpies strive for that elusive flag.

"The motivation of the group has not changed … there is no question that this year's premiership is going to be one of the best ones ever won given the circumstances," Adams said.

‘You can’t be punished every day’: Bird defends Folau signing