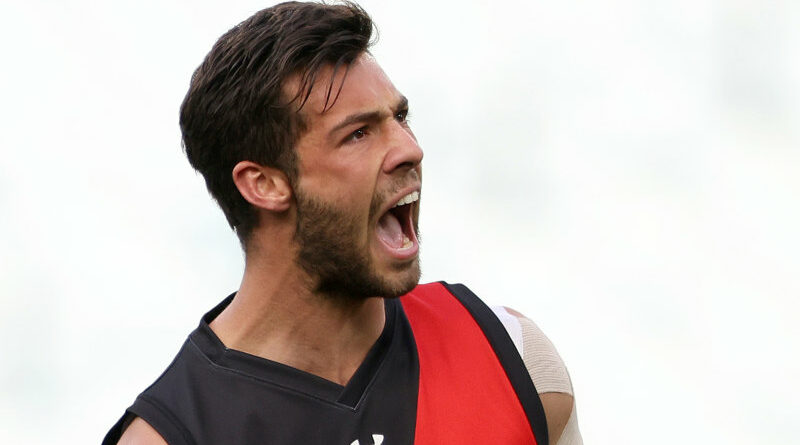 Essendon’s finals hopes have taken a further blow, with utility Kyle Langford’s season in doubt after he re-injured his hamstring in his return game against Sydney on Sunday, and captain Dyson Heppell set to miss a week after breaking his thumb.

Langford, 24, was playing his first match after straining his hamstring in the win over Adelaide in round 17. Included for the crucial game with the Swans little more than three weeks after the initial injury, Langford played out the match against Sydney, finishing with 17 disposals, seven marks and an equal career-high three goals as the Dons were narrowly edged by the Swans. 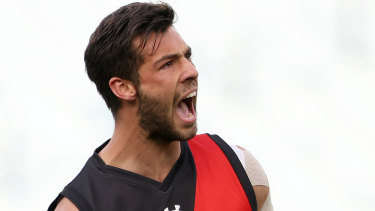 Heppell, meanwhile, also played out the loss to the Swans but the Bombers confirmed he had broken his thumb, the opposite thumb to the one he injured earlier in the season. He has been ruled out of this week’s match against the Western Bulldogs.

As the AFL confirmed the round 21 fixture on Monday, Geelong indicated Jeremy Cameron faces another week on the sidelines in his return from a third hamstring strain. The star forward is progressing well but football department chief Simon Lloyd suggested the Cats were leaning towards not having Cameron face Greater Western Sydney at GMHBA Stadium on Friday night.

“Jeremy is in good shape, progressing well. We’ll make a call during the week but may lean on giving him another week,” he said.

Cameron was subbed out of the round 16 clash against Essendon just before half-time when he strained his hamstring. He went into that clash with hamstring tightness and had to complete a series of run-throughs in the dressing room before taking to the field.

Carlton’s hopes of having a frontline ruckman available for Saturday’s clash against the Gold Coast Suns have been boosted after scans confirmed Tom De Koning had escaped a major injury against St Kilda.

Blues fitness boss Andrew Russell said on Monday that De Koning had escaped a pectoral injury, despite being subbed off at half-time of Friday night’s strong win over the Saints, which has the Blues back in the finals hunt.

“Tommy doesn’t have a pec injury. He has no muscle injury, which is great,” Russell said.

Fellow ruckman Marc Pittonet (ankle) is still returning to full fitness and with forward-ruckman Levi Casboult (knee) yet to confirm his availability, the Blues faced the prospect of being without a key big man against the Suns.

The undersized Jack Silvagni was used as De Koning’s back up and then had to primarily take over the role. While he was thumped in the hitouts, he excelled around the ground to the point he was awarded nine coaches votes. Eddie Betts (ankle) faces a fitness test but Charlie Curnow said on Monday he had pulled up well from his return match and the Blues had made the right decision in recalling him.

Coach Ben Rutten alluded to a possible issue with Langford’s fitness when speaking to the media after the game on Sunday.

“He copped a couple of knocks throughout the game,” Rutten said.

Langford, who rotates between the midfield and forward line, had been a mainstay of Essendon’s side this season before his initial injury, averaging a career-high 21 disposals.

Jayden Laverde (shoulder) is also in doubt for the Dons’ game against the Western Bulldogs, having been substituted from the game against Sydney in the dying minutes, but has been cleared of serious injury. 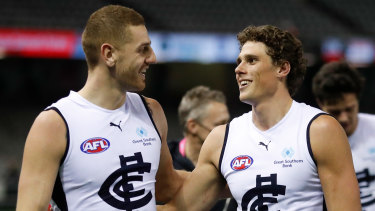 Liam Jones and Charlie Curnow walk off the ground victorious after their win over the Saints.Credit:AFL Photos

Having fallen to 10th on the ladder after the weekend’s results, the Bombers face an uphill task to make the finals, especially with the ladder-leading Bulldogs to come in round 21. But the Dons have two more seemingly winnable matches in the last two rounds of the season: away to Gold Coast then up against Collingwood.

Essendon find themselves four points adrift of eighth-placed Fremantle but the Bombers’ percentage is better than that of any of the other teams vying to secure the last two spots in the eight.

Langord’s injury diagnosis was revealed as the AFL confirmed Essendon’s clash against the Western Bulldogs had been shifted from Friday night because it would have meant only a five-day break for the Bombers. Teams are allowed only one five-day break under the collective bargaining agreement, something the AFL is keen to debate when fresh CBA negotiations begin. The Bombers and Bulldogs will now meet on Sunday afternoon.

The Dogs could be boosted by the return of Adam Treloar from his syndesmosis injury.

The West Coast Eagles will host Melbourne on Monday night, meaning the Demons can finish their quarantine stint in Western Australia. The Richmond-North Melbourne, Carlton-Gold Coast and St Kilda-Sydney clashes will be held in Melbourne, while Collingwood will play for premiership points for the first time when they travel to Launceston to face Hawthorn.

Magpies hedge bets ahead of match against Rance-less Tigers

Are the inmates running the Asylum? Broncos reveal switch to player power