The prospect of Collingwood defender Darcy Moore playing in the Magpies' first final in a fortnight is in doubt after he sat out the final quarter of Friday night's game against Essendon with tightness in the same hamstring that had forced him to miss the previous five games.

The unlucky 23-year-old has a history of soft-tissue injuries and took no part in last year's finals series after leaving the ground with a hamstring issue in round 20. 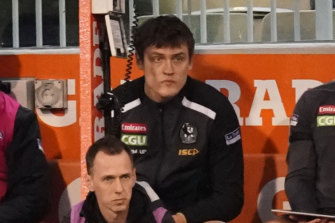 He had his arm in a sling for the second half but Essendon coach John Worsfold said it was too early to determine the extent of the injury.

"How much damage is done you can't really tell, so he is not ruled out for the next game," Worsfold said.

"We're hopeful that the damage and the soreness from it won't be too bad and he will be able to get through that over the next week or so."

In a night that turned out tough for defenders, Collingwood's Matt Scharenberg was concussed in the first quarter and sat out the game on the bench. 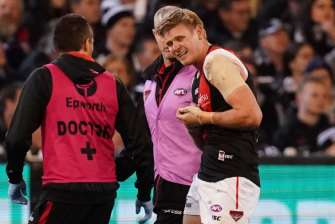 Buckley said the 23-year-old felt better towards the end of the match but he would be monitored.

Essendon's Aaron Francis played out the game after rolling his ankle but was sore and will need time to recover before the elimination final.

Collingwood hope to have Jordan De Goey and Steele Sidebottom back from injury with Sidebottom expected to see the surgeon early next week to determine whether the operation he had last Wednesday to fix a ruptured testicle was successful.

Jaidyn Stephenson will also play in the VFL on Saturday after his 10-game suspension ended on Friday night due to the Magpies being scheduled to play their AFL game on Friday night.

"His training block has been exemplary. He has done everything asked of him and his loads have been pretty high at times but he is on top of the ground and training well," Buckley said.

"There is a risk every time someone takes the field – he has to get through it but we think he is ready to take that next step … he's right to go. There is no limitation on what he is capable of doing at the moment."

Essendon should have Cale Hooker, Dyson Heppell, Orazio Fantasia and Jake Stringer back for the elimination final and Worsfold was pleased that ruckman Tom Bellchambers was unscathed in his first game since round 15.

Money had nothing to do with Tigers split, says Matterson

Bono delivers rousing speech to Ireland stars as sights set on Triple Crown vs England
We and our partners use cookies on this site to improve our service, perform analytics, personalize advertising, measure advertising performance, and remember website preferences.Ok