Greater Western Sydney will try to win this year’s premiership without star forward Toby Greene after he was suspended for three matches for making contact with an umpire.

Greene’s advocate Ben Ihle had pushed for the Giants vice-captain to be fined $20,000 to $25,000 but the jury of Richard Loveridge, Shane Wakelin and Stephen Jurica instead handed him a penalty that will wipe him out for the rest of the finals.

The sanction was well short of the minimum six matches called for by the AFL, which wanted a ban that would send a message to players at all levels that such behaviour was unacceptable.

It was unclear on Tuesday afternoon if the Giants would appeal the penalty. With players and staff on the road without access to reception, Greene was not logged in to the video conference to learn his fate after a hearing that lasted more than four hours.

Greene has been suspended on seven occasions for a total of 10 games during his 10-year career. This was the fifth time in his past three finals campaigns he has been sanctioned.

The Giants face Geelong in a cut-throat semi-final this week for a berth in the preliminary final against Melbourne. 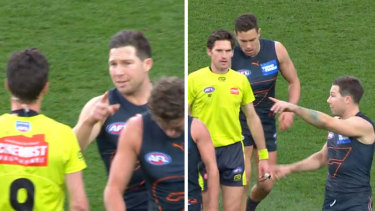 Toby Greene has been suspended for three games for his bump with umpire Matt Stevic during the elimination final.

After nearly three hours of evidence, the jurors deliberated for about 40 minutes and found Greene’s contact with umpire Matt Stevic was “aggressive, demonstrative and disrespectful”.

This came despite Stevic’s testimony that Greene’s contact was “minor” and he had not felt insulted or threatened by the exchange.

Greene confronted Stevic during three-quarter-time of the Giants’ heart-stopping win in the elimination final over Sydney. He was unhappy a free kick he was awarded had been reversed, alleging Swans youngster Justin McInerney had “taken a f—ing dive”.

Under questioning by Ihle, Stevic said he had not found the exchange to be abusive nor felt insulted or threatened.

Stevic had also made a similar statement to umpires’ coach Michael Jennings in an email on Saturday night.

Stevic said he believed at the time Greene was not disrespectful, aggressive or demonstrative, but upon reflection “I don’t think it’s a good look for the game” when quizzed by Jeff Gleeson, QC, for the AFL.

“I would say there’s an element of it being disrespectful,” Stevic said.

Gleeson, however, said Greene was “angry” at having the free kick reversed and made a “beeline” for the umpire at the three-quarter-time break.

“He did it while he was complaining a player was taking a f—ing dive,” Gleeson said. “He walked towards Matt Stevic angrily, he complained, he swore, he got in his face and he bumped him.

“Matt Stevic said there was an element of it being disrespectful. I won’t be as diplomatic as Matt Stevic. It was insolent and it was contemptuous.”

Ihle accepted it was a “terrible look” for the game but labelled the AFL’s case as “circumstantial”, and urged the jury to consider Stevic’s evidence he had not felt threatened by Greene. 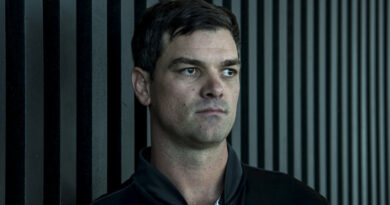