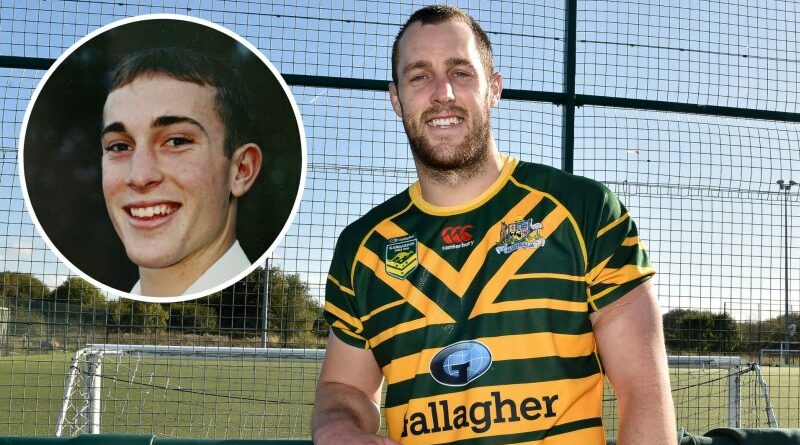 Manchester: Isaah Yeo will look to the heavens the moment he steps onto the field for his Australian Test debut, just as he does before every game he plays, and have a quick word with his uncle Gerard.

With the 20th anniversary of the Bali bombings marked last week, Yeo’s first Kangaroos appearance against Scotland on Saturday morning (5.30am AEDT) will cap an emotional week for the extended Yeo clan, an ever-present fixture in Dubbo’s rugby league scene.

Gerard was no different. Yeo, his father Justin and uncles Paul and Simon all have his name tattooed on their shoulders.

The impact of both a life lived to the fullest and Gerard’s death during the attacks that claimed 202 lives endures two decades later for Yeo and his family.

“I talk to him every game,” Yeo told The Herald of the Coogee Dolphins centre affectionately known as ‘Pancake’, one of six teammates not to return from that fateful 2002 end-of-season trip.

“Every time I run out I have a word, and I know that means a lot to my family. It’s been 20 years for us. We’ve obviously learned how to deal with it but it’s still never a nice time of the year.

“All you can do is hope you’re making your family proud and act that way. I know the grandparents, aunts, uncles, nephews and cousins, I know they’re all proud of me and love watching me.

“We’ve had our tough times and that Bali bombing, we do carry it with us through Gerard, and we always will.”

Paul had played in the same Dolphins side as 20-year-old Gerard, but sat out the club’s Bali trip because his son Joseph was due to be born soon after.

“He reminds me of Gez in so many ways,” Paul told a 1000-strong crowd at the renamed Dolphins point last week.

“Uncle Paul spoke so well at the memorial and I was hearing things I’d never heard before in that speech,” Isaah said in Manchester.

“Obviously I was only seven and quite young when it all happened. The bits I do remember, they do stick with you, the emotion of it all. They’re tough memories.

“It’s a tough time for us but the blessing of it is everyone gets together and marks it, remembers what happened and remembers Gerard and they get through it together. You carry it with you and it has its impact.” 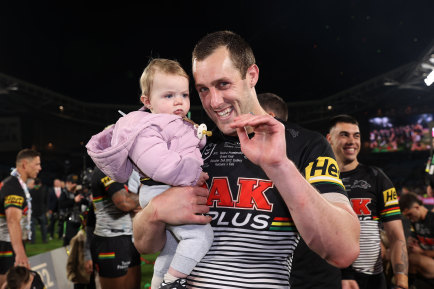 Yeo celebrates Penrith’s premiership with the next generation, daughter Haven.Credit:Getty

Yeo’s own influence on the representative scene is light years from the “tall, skinny centre” growing up in Dubbo’s rich NRL nursery.

He debuts in green and gold as James Tedesco’s vice-captain alongside Cameron Murray. 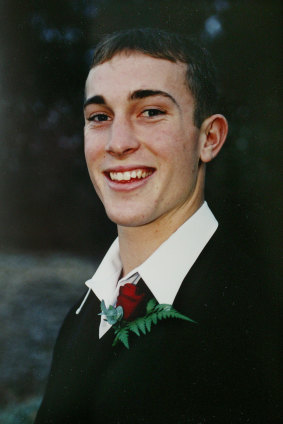 The leadership role is a nod to Yeo’s emergence as one of the first players picked in NSW Origin sides in the past two years and his pivotal place in Penrith’s back-to-back titles.

“This is a long way from when I was a kid,” he laughs. “I wasn’t too crash hot I never played schoolboys, NSW, anything like that growing up.

“I was in the southern country team that all the city teams would hammer so I was never under any illusions, I didn’t think I’d be making rep teams as a kid.

“My first rep game wasn’t until 2014 when I made a NSW Residents team and I’d already played NRL by then. I was the same age as Bryce Cartwrights, Dallin Watene-Zelezniaks, Mitch Moses is the same age too, all those guys I played against.

“They were the stars coming through and I was the country guy watching from afar. I was just someone who worked hard, the harder I worked the luckier I got. It’s very cool to be on this stage now.”

‘It was boring, but I was happy about it’: Young Cats fans lap up the sweet taste of premiership glory