Home » Rugby League » ‘It could be my last year’: Pies skipper not thinking about footy beyond 2022

A fit and firing Scott Pendlebury has hinted that his ninth season as Collingwood captain could be his last in the AFL.

The 34-year-old was again selected to lead the club by the players and key senior staff with Taylor Adams, Jeremy Howe and Darcy Moore filling vice-captain roles. 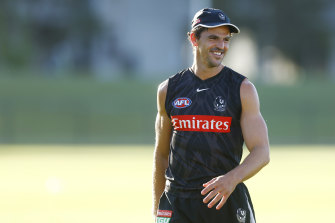 Scott Pendlebury will lead the Magpies for a ninth season.Credit:Getty Images

“It could be my last year as a player, I don’t know, but I’m not thinking about that,” Pendlebury said when asked if it could be his last year as captain.

“I’m thinking of having a good pre-season which I’ve had. I’m thinking about getting the boys ready for the season. We are healthy, we are fit and have our concepts down pat, now it’s about bringing all that to life.”

New coach Craig McRae will move Pendlebury to a half-back role this season with a few cameos in the midfield and the veteran is looking forward to the change, suggesting he had been keen on such a move for a couple of years.

“With guys like Brayden Maynard, Jack Crisp and Nick Daicos getting more time in the midfield, I’ll go to half-back a bit more. There will still be times I will go into the midfield,” Pendlebury said.

“It’s hard having to defend someone – I don’t want to have to do that too many times. But I’ve really enjoyed playing behind the ball.

“It’s something I have wanted to do for a long period of time so to get that opportunity for a whole pre-season and to learn a new role, watch how guys around the league play the role and school myself up – it has been exciting.”

Magpies fans were concerned when Pendlebury broke his leg during training in December but he said he recovered quickly once he had surgery on the leg.

“It was a little bit frustrating to break the leg in mid-December but I’m fortunate enough to have surgery and be back doing most things in a couple of weeks,” Pendlebury said.

“As weird as it sounds, it was actually a good broken leg. I got a plate in there and two weeks later it was good as gold. I feel really good. I’ve had a good pre-season which is the key to be able to stay on the paddock.”

Moore’s elevation to the leadership group comes as he enters the last year of his contract and Pendlebury wants the star key position player to stay at the club.

“I think Darcy has just got a title as vice-captain but he has always been a strong leader around the place,” Pendlebury said.

“How he conducts himself, his football speaks for itself and his character – it’s all qualities we want at Collingwood and, hopefully, he decides to stay at Collingwood a little bit longer.

“This year was the most guys getting a mention [for a leadership role] I’ve seen in my time, so there is a lot to work with [for the future].”

Adams shapes as a replacement for Pendlebury when his time as captain ends while Howe is already a vocal leader in defence.

“Darce, Tay and Howie have had their injury battles over the last couple of years so they can relate to that side of it, but Tay has come a long way with his leadership and he is really driving and taking ownership of our midfield now,” Pendlebury said.

“It’s great to have Howie back as he has missed a lot of football the past two years and if you watch training you see how much he talks behind the footy and sets everybody up so it’s really important those guys can get through a season for us.”

Pendlebury said Jordan De Goey trained inside on Wednesday due a recent knock to the ribs but the forward was making strides since returning to training after finalising his plea deal from an off-season altercation while in the United States.

“It’s great to welcome him back, it’s good to see him as I know it was hard for him to be away from the place for so long,” Pendlebury said.

“He has looked really good in forward or midfield at training.”

Hogan returns to training a day after car crash

‘I was throwing up’: Maroons utility could have been ‘in grave danger’