Des Hasler’s endorsement of him as a State of Origin contender has lifted Haumole Olakau’atu to new heights, but it is a blue and gold snubbing that will be front of mind for the Sea Eagles second-rower when he steps out on Friday night.

Olakau’atu is one of several Parramatta juniors who have pulled on the maroon and white in recent times, with teammate Manase Fainu famously getting him a start by roping him into Manly-20s training from the carpark.

The Sea Eagles are still smarting from a 38-0 Magic Round shellacking at the hands of the Broncos that dropped them out of the top eight.

Olakau’atu’s five tackle-breaks were the most of any Sea Eagle in the heavy defeat, while his return from suspension is particularly timely given Blues back-rowers are dropping like flies just two weeks out before Brad Fittler names his squad for the State of Origin opener.

Aside from a NSW debut, Olakau’atu’s own motivations at Bankwest Stadium stretch back to his schoolboy days, when he couldn’t crack the Eels junior ranks and considered giving footy away.

“I’d like to put on some hits. We’ll see how it goes but games like this, I do take it personal,” he told The Herald. “I’d like to get one over them. There’s a lot of us junior boys and I love seeing all of us who didn’t make it at Parra here making it now. 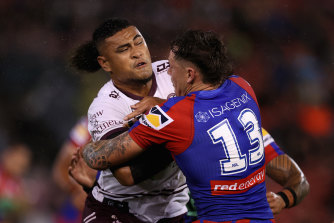 Haumole Olakau’atu’s impressive rise has him in the NSW Origin frame.Credit:Getty

“I thought, ‘I’ll just go play footy for fun, I’ll go work with my old man’. He’s a concreter and I actually love it, us Tongans, we love concreting. But when I came up here and started 20s training, I had that hope again, I thought I could make it.”

Neither Tom Trbojevic nor Daly Cherry-Evans trained on Monday as they nurse corks, but the club is adamant both will take their place against Parramatta, while Josh Schuster is also firming to return from a calf injury.

Friday’s clash comes almost a year since Schuster tore the Eels to pieces on the same day Bob Fulton – the man who scouted him from Parramatta’s catchment area – passed away.

Olakau’atu rarely crossed paths with Fulton, but describes coaching protégé Hasler as his biggest footballing influence and the spur behind his impressive past 12 months.

“At the start of last year Des grabbed me, pulled me into his office and [told me] I can be a Blues player if I just put my head down and play the footy he knows I can,” Olakau’atu said.

“Hearing that gave me so much confidence. He’s the first coach to believe in me that much and coming from Des, that meant a lot to me. It was a big thing for me at the time.”