Teenage prospect Joseph Suaalii is set to make his long-awaited NRL debut against the Broncos on Saturday after getting the green light from Trent Robinson.

The Roosters coach has been coy in recent weeks about when the 17-year-old would make his first-grade bow and told reporters on Thursday afternoon he was “close”. 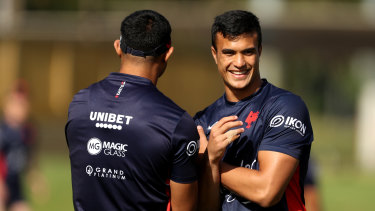 ‘It’s time for him to start his journey’: Joseph Suaalii.Credit:Getty

In March, the NRL rubber-stamped an exemption to allow the Roosters to play Suaalii before his 18th birthday, which is in August, in an effort to keep him away from rugby union.

The King’s School Year 12 student came through the Rabbitohs system but was offered a multi-million dollar deal by Rugby Australia at the age of 16 in 2020. He rejected both offers, instead choosing to sign with the Rabbitohs’ bitter rivals.

Meanwhile, Israel Folau has lodged an application to Queensland Rugby League to make a return to rugby league in the local Gold Coast competition.

The move is being back by former politician Clive Palmer, who has called a press conference alongside Folau in Brisbane on Friday morning.

Folau is expected to make his return with the Southport Tigers, with whom Palmer is associated.

‘I like playing there’: How your team fares at their new NRL home ground