The woman who has accused NRL star Jack de Belin of sexual assault was too traumatised to remember a man standing at the door shortly before the alleged attack, a jury has been told.

The three-and-a-half week trial of Mr de Belin, 29, and his co-accused Callan Sinclair, 23, is expected to conclude on Wednesday with the jury to then retire to consider its verdict.

During his closing arguments on Tuesday, crown prosecutor David Scully told the Wollongong District Court that the jury should give little weight to the evidence of Troy Martin.

Mr Martin told the court during the trial that he briefly saw Mr de Belin and the woman, who cannot be named, naked in the bedroom of a North Wollongong apartment in the early hours of December 9, 2018.

Mr de Belin and Mr Sinclair have pleaded not guilty to five counts of aggravated sexual assault relating to the alleged attack of the woman inside the townhouse, which belonged to the St George Illawarra forward’s cousin Jake Lewis.

Mr Martin, who was Mr Lewis’ housemate, testified that he woke to sounds, went to investigate and saw Mr de Belin and the woman through the doorway for several seconds.

Mr Martin said that when he peered through the open bedroom door, the woman asked “who was that” before the door was closed on him.

During her testimony, the woman repeatedly said she had not seen a fourth person in the apartment.

Mr Scully argued that the complainant couldn’t remember seeing Mr Martin in the house because she was mentally scarred by the ordeal.

“It was only a brief few moments in what was an otherwise extremely traumatic series of events in the unit,” he said.

“A traumatic series of events where two men repeatedly had sexual intercourse with her without her consent.

“You might think that the focus of her attention at that time and … what would be burned in her memory, is those two men and what they did to her.”

In police phone taps that were played during the trial, Mr de Belin and Mr Sinclair were repeatedly heard saying in conversations with each other, their friends and family that all sex was consensual.

They are heard saying that they wanted to make statements to police and had a desire to tell the truth because they had done nothing wrong.

“Two persons who are hearing all these rumours going around about a girl alleging things having happened, what more powerful evidence can you get than them saying effectively ‘we’ve got nothing to hide, just tell the truth’,” Mr de Belin’s barrister David Campbell said.

“Ladies and gentlemen, it is our case that not only did they tell the truth in what they were reciting to other people in these messages … but also here when they went into that witness box.”

After the alleged assault, the woman caught an Uber with the two men from the apartment to another nightclub.

She told the court that during the ride and the short walk to the Fever nightclub, that she was in fear for her safety.

She testified that she walked in front of Mr de Belin and Mr Sinclair because she could not “get away” from them.

CCTV footage played to the court showed the woman walking behind the two men and at one point she walked alongside Mr Sinclair with his arm around her shoulder.

Also, at one point Mr de Belin stopped to take a photograph with fans in the street while Mr Sinclair crossed the road while the woman hung back before joining the other two men.

Mr Smith said that the video evidence was “stark, objective and independent”.

“Consent given at the relevant time but later regretted is still consent.”

The trial will continue with the second half of Mr Campbell’s closing arguments on Wednesday before concluding with Judge Andrew Haesler’s directions to the jury. 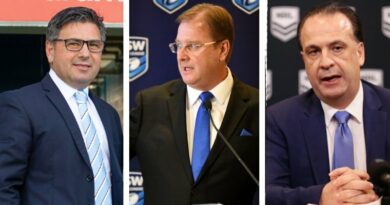 More than $20m in funding in doubt after NSWRL boardroom brawl