James Graham is seeking to leave the NRL after the English forward requested a release from St George Illawarra.

The Dragons confirmed on Thursday Graham had asked to leave the club to return to the UK Super League.

“St George Illawarra have been involved in discussions with Dragons forward James Graham and his management regarding an opportunity for him to return to the English Super League with immediate effect,” the club said in a statement.

“The Dragons will consider this option for Graham on the merit a replacement player is secured by the club prior to his release.”

Graham has played 185 NRL games after arriving at the Bulldogs from the Super League in 2012.

He played in the 2014 grand final, which the Bulldogs lost to Souths, before joining the Dragons in 2018.

After a grim season in 2019 in which the Red V finished second-last, things continued on a miserable track this season with four straight losses — including two consecutive matches after the COVID-19 break in which the team failed to score a try.

The Dragons finally got on the board with a win over Cronulla on Sunday, but there have been question marks over Graham’s performances in 2020.

Nobody can ever question the veteran’s work rate or effort, but he has lacked his usual punch through the defensive line this season.

The 34-year-old played 224 games with St Helens in the Super League and has totalled more than 400 professional rugby league appearances in a career spanning 17 years.

This is the last year of Graham’s three-season deal with the Dragons.

It’s understood Graham only approached Dragons management on Wednesday afternoon and if he did return home it would be to St Helens.

Graham’s minutes have dropped in the final season of his contract to just 36 a game. Given the Dragons want to secure a replacement before his departure, it is likely he will still face the Gold Coast on Saturday afternoon.

There are limited options on the market for St George Illawarra but they will benefit from the fact players outside rival clubs’ starting line-ups are not enjoying any game time.

Matt Eisenhuth was linked to Cronulla last month after not playing first grade at the Wests Tigers this year.

Daniel Alvaro is another big-name middle forward yet to see any NRL action this year, but he remains contracted at Parramatta until the end of next year. 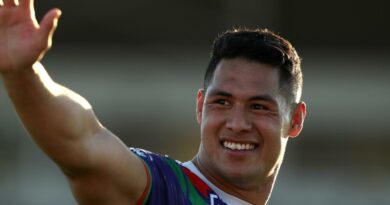