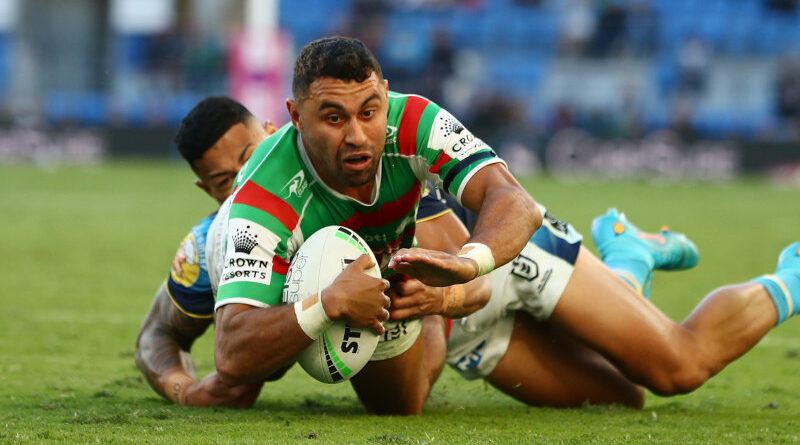 A hat-trick to Alex Johnston has spurred South Sydney to a comfortable 30-16 win over Gold Coast.

Johnston’s third try, in the 70th minute, iced a back-and-forth game on Saturday afternoon at Cbus Super Stadium with the Titans slipping to their ninth defeat in 10 games.

The Rabbitohs winger brought up his 150th NRL try, becoming just the 15th player ever to achieve that feat.

Enjoying a 12-4 lead at the break, Johnston bagged his second just after half-time when an error in midfield gifted the Bunnies field position.

Some soft hands to the left edge put him into space, and with enough momentum got to the line through contact. 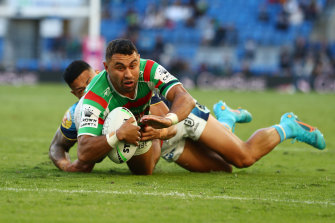 South Sydney’s Alex Johnston dives over for a try against the Gold Coast.Credit:Getty

Titans skipper Tino Fa’asuamaleaui crossed to get them back into the contest, but Souths wrangled back momentum in the 60th minute after a stellar run by Campbell Graham was finished off by a surging Taane Milne who crashed over.

In the first half, the visitors enjoyed an eight-point buffer at the break after tries to Johnston and Jaxson Paulo.

They cracked the Titans defence after just six minutes with two crash plays creating space on the left edge and Cody Walker lofted a pass out wide to his winger who stepped off his left foot to score.

The Titans fired back through Greg Marzhew shortly after when a successful captain’s challenge gave them attacking set.

Toby Sexton fired a long pass out to his left edge and the 104kg wrecking ball Marzhew powered through two tacklers to find his way to the line.

Marzhew ran for 122m in first half but he couldn’t stop Paulo shortly after when he latched onto a Lachlan Ilias high bomb, coming down through contact to score.

It was an arm-wrestle in the final minutes of the half as the Titans heaved pressure on due to their high completions (95 per cent).

Paulo came close twice more but was stopped by scrambling defence in the final few minutes before Souths ran away with the contest in the second half.

Williams to retire from football after Wolfpack bid falls through

Tools down as Jacks returns to Storm