Home » Rugby League » Jones’ call is both principled and bizarre. What does it mean for the Blues?

Liam Jones’ vaccination-averse retirement has the rare distinction of being at once admirable for its principled stand and yet unfathomably bizarre.

Jones has sacrificed his career and with it nearly half a million dollars next year alone – and there was every chance he would have signed on for a new contract beyond next year – for the insistence that he does not want a vaccination against COVID-19. That is, for not wanting to take a vaccine that has saved hundreds of millions of lives. 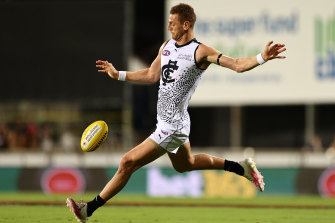 Officially we don’t know why he has retired, for he does not want to give his reasons publicly. We do know that he was resisting vaccination, but not why he was so resistant.

Whatever your view of the logic of his decision, his bravery in holding to his views regardless of the financial and other pressures is to be respected.

There has been no hint of it being based on medical grounds, such as a history of anaphylaxis, which ATAGI lists as a possible basis for a medical exemption. It could reasonably be assumed that if he could get an ATAGI exemption, he could get an AFL one.

Some other players, as with a minority in the broader community, have expressed reservations to their clubs about being vaccinated on the grounds of uncertainty over possible side effects or about the mandatory nature of the vaccination rules. The club, AFL, state and federal government medical positions are that the evidence is irrefutable.

The AFL had said when it announced the vaccination mandate that its feedback was there was only a handful of players who were vaccine-hesitant. The league still believes that is the case but is as yet unaware of any other player planning to step away from playing or retire.

The other surprising thing about Jones’ decision is that while it ends his AFL career it will not end the difficulties of an unvaccinated life (beyond the higher risk of getting COVID-19). If he wants to go to a restaurant, bar, shop, get another job or get on a plane, it’s going to be difficult for him to hold this vaccine line.

What it means for Carlton now is that under current rules they cannot go to the draft and just take another player.

The decision came after an important list lodgement last Wednesday, with another final list lodgement to come later in the year. The best they can do is take a supplementary player after the train-on period early next year.

Carlton will ask the AFL for the right to take an extra player in the draft because of the unusual timing and circumstances of Jones’ retirement. They are unlikely to get it.

Other clubs expected the Blues to petition the AFL for a compensatory draft pick commensurate with losing a player of his age and wage due to exceptional circumstances. That is, to treat him like a lost free agent.

This will not get up with the AFL.

One reason beyond any others is that Jones’ decision not to state the reasons for his retirement makes it impossible to argue for compelling or exceptional circumstances for an extra draft pick or access to add another player at the end of the draft.

As for the salary cap impact, Jones’ contract for next year comes out of the Blues’ cap. The only component to be included in the cap will be any financial agreement that was reached with Jones upon his retirement.

Sources indicated the AFL formula for dealing with players under the vaccination protocol of inactive and active lists meant that a settlement of roughly $25,000 would be made to Jones and that amount would be included in the cap.

On the field, new coach Michael Voss now needs to find another key back to play alongside Jacob Weitering. One option is Caleb Marchbank if and when he can get fit, which is something that has been a common refrain through his career.

The other option is Lewis Young, the 22-year-old Bulldog who was brought into the club in the trade period to add depth, competition for spots and a generational handover for when Jones retired in a year or two. He and Marchbank are now at the front of the queue for round one.

Carlton picked up Lewis, not Neil, Young but this whole episode appears a case of the most overused borrowing of Neil’s song, the needle and the damage done.

‘Give it to me, but not my players,’ McGregor tells Dragons fans 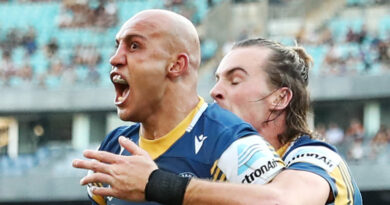 ‘The memory of a goldfish’: Ferguson survives aerial raid as Eels win