Home » Rugby League » ‘Just an honour to be part of it’: Arnell becomes first former player to coach in AFLW

There are a lot of good narrative arcs when it comes to Port Adelaide’s inaugural women’s coach, Lauren Arnell.

Long before the AFLW was around, she grew up on a cattle farm northwest of Melbourne and picked up footy at 18, while studying to become a teacher in 2005. Discovering a natural gift for the sport, she then went on to become a nine-time premiership player for the powerhouse Darebin Falcons in the VFLW.

When AFLW did come around, she was not only in the first cohort of players but led Carlton out as captain for the first AFLW game at Ikon Park against Collingwood. Yet despite being signed as a priority player and spending one year as captain, and another as vice-captain, she moved to Brisbane after two seasons when told there wasn’t room for her on the Blues’ list. 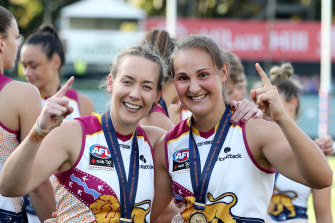 She retired as a Lion with a premiership medal around her neck – from the 2021 grand final, in which she kicked a goal in her final game.

Now, less than a year after her retirement, Arnell, now 35, has become the first past player to become a senior coach in the AFLW system, taking the reins at expansion club Port Adelaide.

Arnell told The Age the feeling reminds her of her first season as captain of Carlton, when everyone would ask: ‘How does it feel to be the first?’

“The same response I gave at the time is probably how I feel now – it’s something that I’ll reflect on and [I’ll] understand the weight of it far more later in my life,” she said.

“Right now, I’m just heavily entrenched in trying to do the best that I can [at Port Adelaide].”

Brisbane coach Craig Starcevich says Arnell came to Brisbane “just shot” after leaving Carlton, and given this their message to her was “just to unload herself of leadership and responsibility and just enjoy footy”. 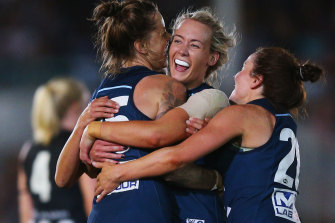 “But she being the type of person that she is, being a natural leader, not having the title didn’t really change the way she acted amongst the group in terms of example setting, advice providing, and all that sort of stuff – all the things you expect from your leaders,” said Starcevich.

It was towards the end of Arnell’s playing career that her coaching side really picked up. In 2019, she was awarded the AFL Coaches Association scholarship and took up a role as academy development coach at the Lions, while continuing her job as a teacher.

After there were no female head coaches across the women’s league last season, Arnell now joins one of three, along with her former Falcons teammate Natalie Wood at Essendon, and Bec Goddard at Hawthorn.

“Us, as male coaches in this space, have been under a little bit of fire recently as to why there isn’t a better split of male and female coaches – which is a completely reasonable argument,” said Starcevich. 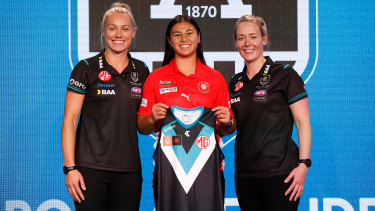 “But the fact of the matter is not enough had experienced the elite level of footy, and now that some of those players are coming out the other end after five, six, seven years of playing AFLW, they’ve got an appreciation of what’s involved. What’s necessary to drop into coaching as a profession.”

Starcevich has no doubt Arnell will do well in the role. When asked what she’ll bring to coaching, he replied “a lot of empathy for players”, and “a very astute footy mind”.

“Us, as male coaches in this space, have been under a little bit of fire recently as to why there isn’t a better split of male and female coaches – which is a completely reasonable argument.”

“She’s got some really good attributes … You never know until you’re in the thick of it, but I’d be surprised if she wasn’t very successful.”

Arnell has made massive contributions to the AFLW space, and the continued development of women’s football, but says “there’s far more people in AFLW that will leave a far greater legacy than myself, I truly believe that.

“I think we all just play a small part in the competition, and hopefully in developing women’s sport in our country.

“It’s just an honour to be part of it and to have Port Adelaide, and Juliet Haslam [head of AFLW at Port Adelaide] in particular, trust me with the role.”

Unfortunately, though, for Arnell and Starcevich, they’ll have to wait a while to face off as rival coaches – the Power and Lions aren’t fixtured to play against each other in AFLW season seven’s home and away season.